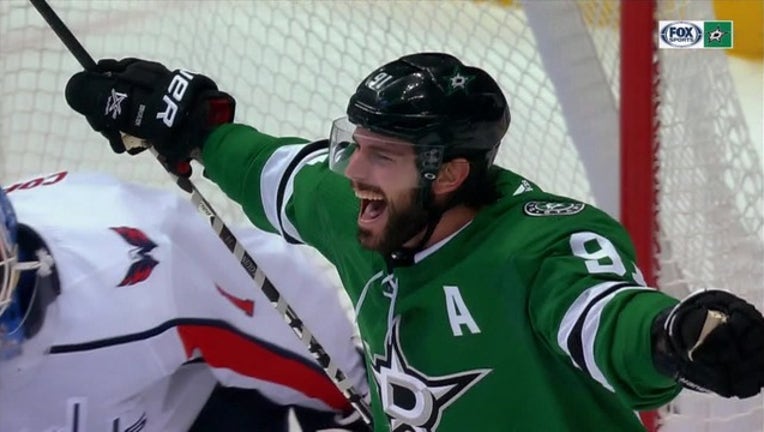 DALLAS (AP) - Tyler Seguin's second goal of the game 3:37 into overtime lifted the Dallas Stars to a 2-1 victory over the Washington Capitals on Friday night.

Anton Khudobin made 36 saves, including the stop of a backhand by T.J. Oshie 1 1/2 minutes into overtime, to help Dallas complete a 3-0-1 homestand.

Seguin's winner, his fourth goal in two games, came after Alexander Radulov skated behind the net and passed across to Seguin at the right of the net.

Lars Eller scored for Washington, which has lost three straight (0-2-1) and is tied with Pittsburgh in points atop the Metropolitan Division. The Capitals have played one fewer game than Pittsburgh, which beat Winnipeg earlier Friday.

Dallas scored first with 6:40 remaining in the opening period on Seguin's power-play goal. Seguin was alone on the left side of the offensive zone when Radulov's shot from the right faceoff circle went off teammate Radek Faksa and Copley's stick to Seguin low in the left circle. Seguin put a wrist shot into the open left side of the net before the goalie could recover.

Eller tied it at 10:19 of the second as he sent a backhand from outside the left faceoff dot past Khudobin and inside the right goalpost.

After being outshot 15-5 in the first period, Washington had a 15-8 advantage in shots on goal in the second. Khudobin kept the Capitals from taking the lead in the last three minutes of the period when he stopped Chandler Stephenson's backhand on a short-handed breakaway.

The Stars were on the defensive in a third period when they were outshot 14-2. Dallas killed the only two penalties in the third.

NOTES: RW Erik Condra made his Stars debut. The 32-year-old was promoted from Texas of the AHL to fill in for Jamie Benn (upper-body injury). Condra played 366 NHL games for Ottawa and Tampa Bay. ... Ben Bishop officially started in goal for Dallas but skated off at the faceoff and was replaced by Khudobin. The Stars mistakenly had circled Bishop's name in the official starting lineup. ... The Capitals have only one goal on their last 31 power plays. ... Seguin has six points in the last three games.

Capitals: Complete a three-game trip on Sunday at Detroit.

Stars: Play the first of three road games on Sunday at Winnipeg.