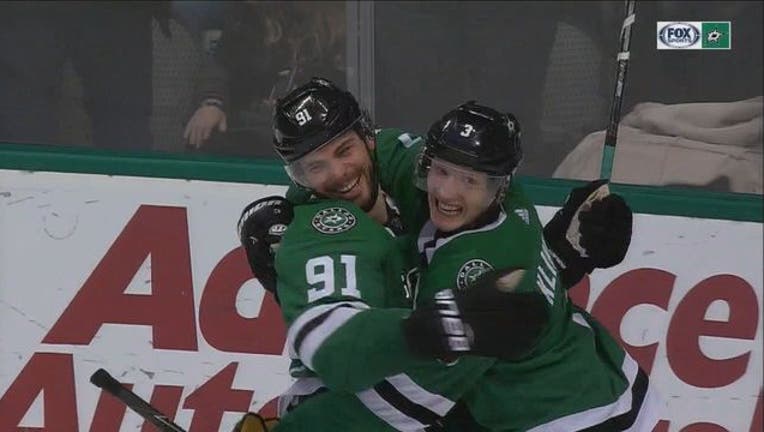 Brett Ritchie had the tiebreaking goal on a power play after a second straight penalty against Sami Vatanen, and the Devils matched their season high with a fourth straight loss. The skid follows a season-best five-game winning streak that started with a win at home over the Stars.

Radulov's 15th goal got Dallas even early in the second period, and Ben Bishop stopped 39 of a season-high 42 shots faced for his fifth win in a season-high ninth straight start.

Seguin had a breakaway with Miles Wood chasing him and decided at the last second to send the puck backward to Jamie Benn. After Benn's shot went across the crease back to Seguin, his shot caromed off Wood's skate into the net as the defenseman tried to close his feet with goalie Cory Schneider out of position.

Taylor Hall had a goal and two assists for the Devils, who scored in the final minute of each of the first two periods, starting with Brian Boyle on a power play with 14 seconds left in the first.

New Jersey pulled to 3-2 with 28 seconds left in the second when Bishop stopped Hall's shot but had the puck go over him when the rebound caromed off defenseman Greg Pateryn.

New Jersey had another power-play goal when Kyle Palmieri sent a shot from the boards through the legs of Bishop late in the third period. Hall got credit for his team-leading 26th assist.

Ritchie redirected a shot from John Klingberg and the puck bounced over Schneider, who stopped 29 shots.

Vatanen touched the puck as he was coming out of the penalty box for cross-checking, and the interference call put the Stars right back on the power play midway through the second period. It was Vatanen's third straight penalty for the Devils.

There were nine penalties in the game two nights after Dallas and Columbus combined for just one in the Blue Jackets' 2-1 win that ended the Stars' four-game home winning streak.

NOTES: Three Dallas-area natives have played in the past two games against the Stars. Seth Jones, son of former Dallas Mavericks player Popeye Jones, had an assist in the Blue Jackets' 2-1 win. Plano natives Blake Coleman and Stefan Noesen are forwards for the Devils. ... Stars D Marc Methot had two shots and three hits in 16 minutes after missing 26 games following arthroscopic knee surgery.

Devils: At the New York Islanders on Sunday afternoon before a weeklong break.

Stars: Home against the Edmonton Oilers on Saturday afternoon before a weeklong break.