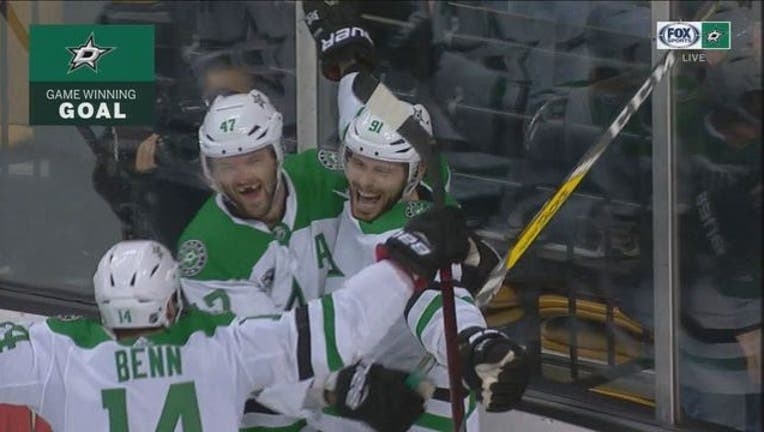 BOSTON (AP) - Tyler Seguin made a move at the left circle to get past one defender, then skated into the slot as the other two Bruins went to the ice.

He swooped wide to Anton Khudobin's glove side, inducing the goalie to leave his skates as well, and then flipped the puck into the net for the game-winner.

"I feel like everyone was just sliding at me, and the whole time I wanted to pass," Seguin said after his goal with a delayed penalty man-advantage gave the Dallas Stars a 3-2 victory over Boston on Monday.

"I was just kind of looking for the right play and just kept holding it," the former Bruins first-round draft pick said. "I just kind of shot it, and luckily, it went in."

Khudobin made 29 saves. Zdeno Chara and Ryan Spooner scored as Boston rallied from a 2-0 deficit to send the game into overtime and earn a point for the 13th consecutive game.

The Bruins have not lost in regulation since Dec. 14.

"It's not easy to get a point in this league," forward Patrice Bergeron said. "So you take the points. And the character we've shown, that's a positive."

Chara scored in the second period and Spooner tied it midway through the third. It was still 2-2 with about three minutes left in the 3-on-3 overtime when Boston's Matt Grzelcyk took down Stars defenseman John Klingberg with a two-handed shove behind the Dallas net.

The referee signaled for a delayed penalty, the Stars pulled Lehtonen for an extra skater and they spent the next minute holding the puck, knowing they could maintain a 4-on-3 advantage the rest of the way.

With 2:01 left, Seguin skated across the middle and beat Khudobin with the game-winner. Fans immediately began filing out, but those who remained gave an extra "Boo!" when his name was announced as the game-winner.

Seguin said he didn't notice the reaction "but I'm sure I'll see it on Twitter later on."

The Stars took the lead about four minutes into the second period when Johns scored from the left circle to finish off a four-man rush. They made it 2-0 when Jamie Benn won a faceoff and put a shot off Khudobin's left pad. It bounced right to Radulov in the slot, who flipped it over to his backhand and put it in the net.

But Chara's slapshot made it 2-1 with less than 3? minutes left in the second. And Spooner tied it midway through the third when his slapshot got through Lehtonen and trickled toward the net; Boston's Charlie McAvoy and Dallas' Esa Lindell fought to get to the rolling puck, but it crossed the line before McAvoy's stick gave it some help.

"We definitely showed some character coming back," Bergeron said. "(But we) definitely want to stay away from that. It's the wrong way to approach games."

NOTES: Bergeron took a puck off the skate in the second period and was in obvious pain but remained in the game to take the ensuing faceoff. ... Willie O'Ree, the Bruins forward who broke the NHL's color barrier in 1958, was at the game. ... The Stars are 8-4-3 versus Eastern Conference opponents this season. ... Dallas D Marc Methot (knee) missed his third straight game. ... Seguin was drafted No. 2 overall by the Bruins in 2010 and played his first three NHL seasons with Boston before being traded to Dallas.