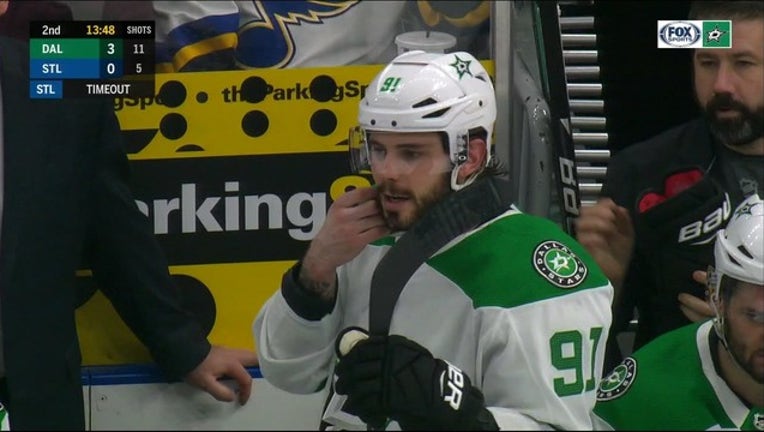 John Klingberg had a goal for the Stars, who won despite generating only 17 shots on net. Bishop, a St. Louis native, stopped 26 shots against his former team and improved to 5-5-1 versus the Blues.

David Perron scored for the Blues, who lost for the first time in eight games against the Stars at the Enterprise Center. St. Louis is 11-5-1 in its last 17 games against Dallas.

The Stars capitalized on their second shot of the game when Seguin scored at 11:27 of the first period. An unguarded Seguin knocked in a loose rebound that eluded defenseman Carl Gunnarsson just outside of the crease.

Dallas added two goals in the second for a 3-0 lead.

Dallas had a 5-on-3 opportunity for 1:35 early in the period and made the Blues pay. Klingberg drilled a slap shot from the slot at 1:43 to make it 2-0. The shot went between goalie Jake Allen's pads for Klingberg's first goal in 18 games since Oct. 23.

It marked the sixth consecutive game in which the Stars scored a power-play goal.

The crowd booed after Seguin scored his second of the night when he beat Allen badly at 6:12 for a 3-0 cushion. It marked the seventh goal Allen had allowed on the last 19 shots he faced.

Seguin has 17 goals this season. He has six goals and seven points in his last four games.

St. Louis took a timeout after the goal, and it worked. Perron scored on a backhand from the right faceoff circle past a screened Bishop at 6:25.

NOTES: Blues forward Alexander Steen was placed on injured reserve with a shoulder injury. He played less than three minutes in the first period Monday at Philadelphia. ... Blues C Tyler Bozak, who missed Monday's game with the flu, was scratched. ... Dallas forward Valeri Nichushkin played in his 200th NHL game. ... The Stars' first shot on goal came at 10:25 of the first period. ... The Blues fell to 25-11-2 in their last 38 games on zero days' rest.

Stars: Play at Philadelphia on Thursday.