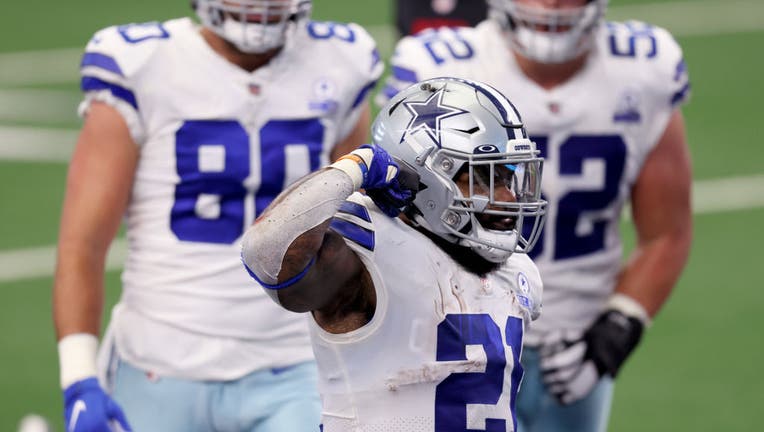 ARLINGTON, TEXAS - SEPTEMBER 20: Ezekiel Elliott #21 of the Dallas Cowboys celebrates after scoring a touchdown against the Atlanta Falcons in the second quarter at AT&T Stadium on September 20, 2020 in Arlington, Texas. (Photo by Tom Pennington/

ARLINGTON, Texas (AP) - The Dallas Cowboys won a game thanks to a watermelon kick and are now 2-0 after smashing said fruit as a motivational tactic the night before each victory.

If that doesn’t say it all about the pandemic-altered 2020 season, then how about the woeful NFC East offering the guarantee that a team will go from 2-7 to the playoffs for the first time in NFL history, according to Sportradar?

Dallas (6-9) is one of those three teams, with the winner between the Cowboys and New York Giants (5-10) from early Sunday getting in if Washington loses at Philadelphia in prime time. Washington (6-9) simply needs to win to advance.

Andy Dalton, 4-4 since replacing Dak Prescott after the star quarterback’s season-ending ankle injury, has directed a three-game winning streak after beating the Eagles 37-17, and the former Cincinnati starter has the Cowboys playing for a lot more than 2021 momentum.

That was the goal a few weeks ago, when first-year coach Mike McCarthy noted that a four-game winning streak to finish his rough Green Bay debut in 2006 was a springboard to a trip to the NFC championship game the next year.

Now, the Cowboys could be two playoff wins from their first run that far in the postseason in 25 years — with a little help, of course.

"We look totally different today than we did two months ago," McCarthy said. "That’s a real credit to our football players."

McCarthy’s first victory with Dallas, 40-39 over Atlanta in Week 2, came on Greg Zuerlein’s field goal on the final play after the Cowboys recovered their kicker’s spinning onside attempt, executed without a tee.

The biggest win before beating Philadelphia was 31-28 at Minnesota a day after McCarthy impersonated the comedian Gallagher by taking a sledgehammer to some watermelons during a team meeting in the hotel.

This time, McCarthy let the game’s captains — receiver Amari Cooper, defensive lineman Tyrone Crawford and cornerback Chidobe Awuzie — do the smashing, with a piñata effect. There was candy inside.

"With us being crazy football players and everything like that, guys really like smashing things," Cooper said. "I think that’s what football is all about, you know, just hitting guys. So, it kind of got everybody hyped for the game."

The receiving trio of Cooper, Michael Gallup and rookie CeeDee Lamb have a seven-game streak of at least one touchdown receiving, with a total of 10. Gallup had two against the Eagles, and Lamb added a rushing score for 11 total TDs in that span. The Cowboys are 4-3 in those games.

The much-maligned defense gave up more than 450 yards for the second week in a row as the Cowboys narrowly avoided giving up the most points per game at home in NFL history. Dallas finished at 34.4, and the expansion Cowboys of 1960 share the record of 36.5 with the winless Detroit Lions of 2008 and the 1948 Giants.

On the bright side for Dallas, the defense slowed rookie Jalen Hurts and the Eagles while the offense scored on five straight possessions. After giving up 14 points in less than 10 minutes to start the game, the Cowboys held Philadelphia to three the rest of the way. But it was still enough to set a franchise record in points allowed with a game to go at 450. The previous high was 436 points in 2010.

Defensive end Randy Gregory had 1½ sacks and three forced fumbles, including one on his full sack and another while dropping Philadelphia running back Miles Sanders for a 4-yard loss. Gregory, who also had two QB hits, returned this season after his fourth suspension over substance-abuse violations.

Linebacker Sean Lee got the first start of his 11th season but ended up playing fewer snaps than backup Joe Thomas. Jaylon Smith played all 73 snaps, while Thomas was in for 58% of the plays to 41% for Lee. It might have been the 34-year-old Lee’s final home game.

RB Ezekiel Elliott had his second 100-yard game of the season (105 yards on 19 carries) playing through a calf issue that has bothered him for weeks and kept him out of a game because of injury for the first time in his career a week earlier.

S Darian Thompson is in concussion protocol. LG Connor Williams injured a knee, but executive vice president of personnel Stephen Jones said on his radio show Monday that Williams "is going to be fine."

This is the first meaningful regular-season finale for the Cowboys since 2013. That’s when they lost a season ender to finish 8-8 for the third consecutive year when a win would have put them in the playoffs.