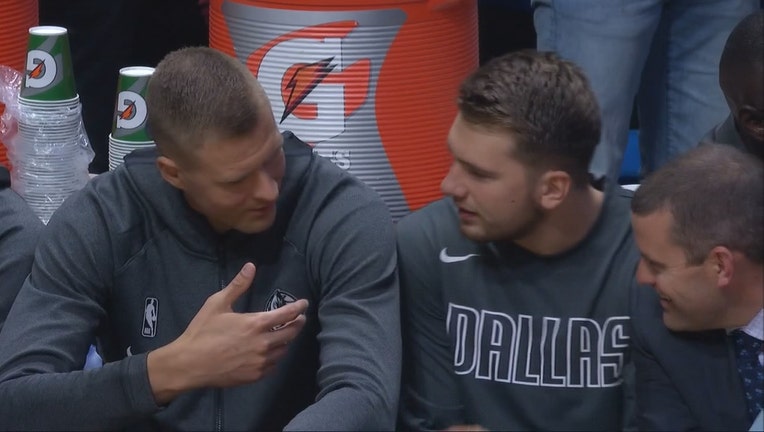 DALLAS - The Dallas Mavericks now belong to the young European pairing of Luka Doncic and Kristaps Porzingis, and maybe for as long as German superstar Dirk Nowitzki led the franchise while spending a record 21 seasons with the same team.

Since Dallas once again fell short trying to add a big name in free agency after trading for Porzingis before the deadline last February, the Mavericks will lean on the two budding stars to get back to the playoffs after missing for three straight seasons. The last time Dallas went this long without going to the postseason, the franchise was among the worst in pro sports coming out of the 1990s. It won't be easy in the Western Conference.

Simply contending for the playoffs will be an accomplishment for the Mavericks.

"I think it's important," said Doncic, the third overall pick in the 2018 draft. "Obviously, there's a lot of teams, they have great players in the West that want to go to the playoffs. I think we can."

Doncic was a nearly unanimous choice for rookie of the year after joining Oscar Robertson as the only first-year players to average at least 20 points, seven rebounds and six assists per game.

The 20-year-old Slovenian's eight triple-doubles were the third-most for a rookie, behind Robertson (26) and Philadelphia's Ben Simmons (12, two seasons ago).

"I really think one of the things that makes him the most special is the fact that he has the ability when he steps on the floor to make four other guys significantly better," coach Rick Carlisle said. "And has the ability to make the game much easier for them."

The 7-foot-3 Porzingis had just been named an All-Star when he tore the anterior cruciate ligament in his left knee in what ended up being his final game with the New York Knicks on Feb. 6, 2018.

Now the Latvian is ready to roll with Doncic after the Mavericks held him out the final two months of last season after the trade even though he could have played. But Porzingis, the fourth overall pick in 2015, isn't expecting some sort of Magic-Kareem connection right away.

"We're not going to come on the court and play like we've played 10 years together already," he said. "But I feel like with the type of personalities and where we come from, we're both European, we both speak Spanish, all those things are going to help build the chemistry. And just knowing how selfless Luka is sharing the ball with his teammates and making everybody better. I have no doubt that we'll find that connection sooner than later."

As for owner Mark Cuban suggesting they could be together as long as Nowitzki was around -- even though Porzingis is 24 -- the Mavericks at least have long-term plans after signing Porzingis to a max contract at $158 million over five years. A max deal for Doncic is a no-brainer.

"Their experiences from a young age mirror each other at least on some level," Carlisle said. "I feel those kind of things ultimately are going to lead to them bonding and becoming more familiar with each other on the court as well."

Nowitzki retired at 40 as the highest-scoring foreign-born player in NBA history, sixth overall with 31,560 points. The smooth-shooting 7-footer carried the Mavericks to their only championship in 2011.

"It's real sad on some levels for sure," said Carlisle, who coached Nowitzki for his final 11 seasons. "But here's a guy that gave every last ounce of everything that he had to this organization, to this fan base, to all the teammates that he had over a 21-year period."

Cuban stayed on Doncic last season about fine-tuning his body in the offseason, and the 6-7 player does look leaner. Porzingis made a point to bulk up and showed off a powerful-looking upper body in the days before training camp.

"For me it was important to feel how I'm supposed to feel but get stronger also," said Porzingis, who was averaging 22.7 points, 6.6 rebounds and 2.4 blocks when he got hurt with the Knicks. "There's a balance with those kinds of things."

While the Mavericks missed on bigger names, they were happy with the free agent they did get in Delon Wright. Acquired in a sign-and-trade with Memphis, the restricted free agent had back-to-back triple doubles in consecutive games against Dallas late last season. He's expected to start alongside Doncic.