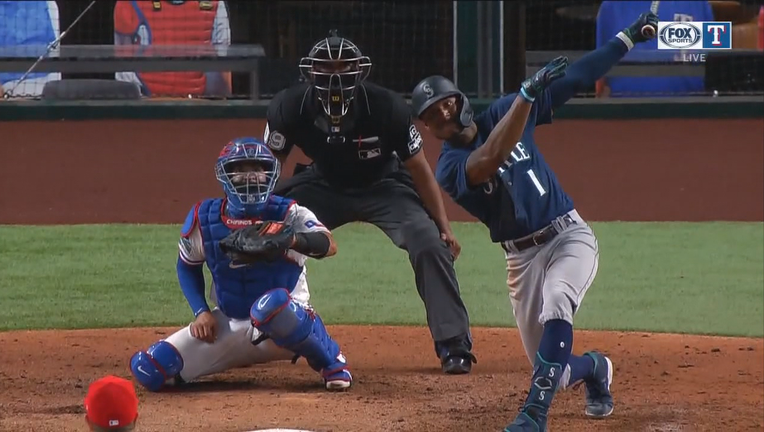 Lewis put the Mariners up 4-2 with his fourth homer, a three-run shot to center field in the fifth off Kyle Gibson (0-2). Seager cleared the bases an inning later with a high-arching drive  that dropped near the first row of seats a few feet beyond the right-field wall for his fifth career slam.

Moore already had a pair of RBI singles before his solo homer to center in the seventh for Seattle, which had lost seven of nine.

"If you snake it just right down the line, you can get it," Seager said about his homer. "But I don't think there was a park that was going to hold either Lewis or Dylan. They hammered the ball."

With the retractable roof opened at Globe Life Field during a game for the first time, the Mariners' three homers were only one fewer than opponents had hit overall in the first eight games there. Everybody in their lineup had a hit and the 10 runs were the most by any team -- only twice before had there been a combined 10 runs in a game. Texas has five homers at home.

"With the roof open, it was a little warmer, but it wasn't bad at all," Mariners manager Scott Servais said. "It was a fun game. A lot of guys contributing, everybody feels good, you start feeling some momentum. We needed a game like this. We hadn't had one this year."

Rangers manager Chris Woodward didn't think the park played any differently with the roof opened, and being 95 degrees outside at first pitch.

"Maybe it was a little bit hotter, but couldn't really feel it," Woodward said. "Maybe the players were sweating more, but the field was fine. I didn't like the outcome."

Justin Dunn (1-1) limited Texas to two runs over six innings for his first big league victory, a day after Justus Sheffield, another 24-year-old Mariners starter, won for the first time. Dunn had gone only seven innings combined his first two starts this season after pitching in four games at the end of last year in his MLB debut.

Gibson allowed four runs and nine hits in 4 1/3 innings. He struck out two and walked one.

Willie Calhoun drove in both runs for Texas, which was coming off a three-game weekend sweep at home over the Los Angeles Angels.

Calhoun had an RBI triple in the first and a sacrifice fly in the third that made it 2-1. The triple ricocheted hard off the wall in the right-field corner back toward the infield, and might have been an inside-the-park homer if he hadn't initially jogged out of the batter's box while watching the ball.

Lewis has a 13-game hitting streak in road games, dating to last season, with multiple hits in the last six. ... Seager has 103 RBIs in 154 career games against the Rangers, one of only three Mariners and 16 players overall with 100 RBIs vs. Texas. He has 29 homers and 101 runs. ... Rangers 3B Isiah Kiner-Falefa made two diving, backhand plays for outs in the fourth, taking hits away from Austin Nola and Evan White.

Mariners: RHP Carl Edwards Jr. (right forearm strain) was put on the 10-day injured list. He last worked Wednesday, pitching a second day in a row to get his first save since 2016 as a rookie with the Chicago Cubs.

Texas: RHP Nick Goody, out the last three games with back stiffness, came on to get the final out in the ninth after the Mariners had loaded the bases.