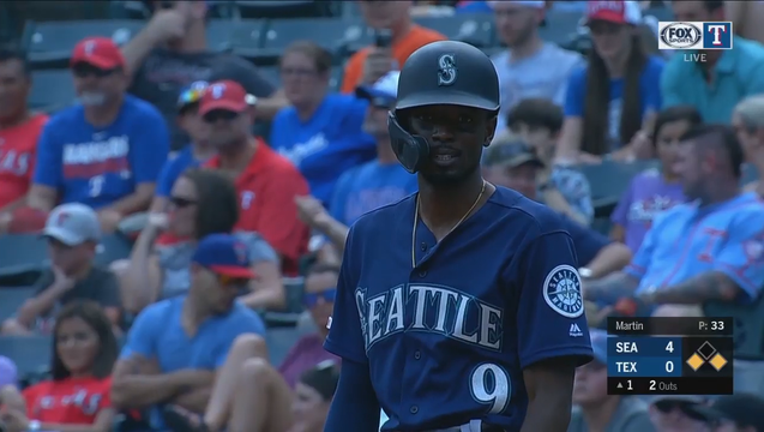 Seager sealed the victory with a three-run homer against Taylor Guerrieri in the eighth inning.

In 153 career games against Texas, he has 28 homers and 99 RBIs, his most against any team.

Seager's first homer at the Rangers' stadium was a solo shot in his third game there on Sept. 25, 2011.

"I hit one my first year here. I do remember that. I only had (three) on the year," he said.

That homer against Merkin Valdez came in the ninth inning of a 12-5 blowout loss. He has hit 14 more at the park, which will be replaced with a climate-controlled stadium next season.

The gametime temperature was 92 degrees.

"It was hot," Seager said. "We were just talking about the climate control. A lot of memories here, but this is something that I certainly won't miss, the heat of this place."

Vogelbach welcomed a little September heat after a frigid August when he averaged .130 with only three homers. Murphy and Vogelbach homered back-to-back in the third inning. Vogelbach was 2 for 3 with two walks and two RBIs.

"When I'm walking, I'm hitting," he said. "My approach is going and I'm seeing the ball the right way. It's just a matter of time until things start to go."

"When it's so hot, you have to attack the strike zone," Seattle manager Scott Servais said. "You can't have long at-bats. That's what we did to them today."

There was a moment of silence before the game for the victims of a mass shooting in West Texas on Saturday. Seven people were killed and 22 were injured. Texas flags at the stadium were at half-staff.

Mariners: SS J.P. Crawford sat out his second straight game because of a tight right hamstring. "He's going to fly back to Seattle," Servais said. "Doctors are going to look at him. My guess is he's going to be out at least a week."

"I think he's going to take batting practice in New York. It's a little bit sore."

RHP Edinson Volquez (strained elbow) was activated from the 60-day injured list and pitched for the first time since April 4 with a hitless seventh inning. The 15-year veteran is expected to retire at the end of the season.

Volquez said he was "a little bit" emotional warming up. "Not in the game. I was ready to pitch."

Woodward said, "He's put a lot of effort into the culture of the clubhouse. It's the least we can do for his sake."

Of the teams' 11 September roster additions, only Mariners CF Braden Bishop started. He went 0 for 4 returning from a rehab assignment at Triple-A Tacoma and being reinstated from the injury list (lacerated spleen).

The Rangers' additions included OF Nomar Mazara and RHP Adrian Sampson from the 10-day IL, LHP Jeffrey Springs and RHP Edinson Volquez from the 60-day IL. Texas recalled 1B Ronald Guzman and RHP Ian Gibaut from Triple-A Nashville. All of them but Court played in the game.

OF Keon Broxton served a one-game suspension on Sunday for hitting umpire Manny Gonzalez with a batting glove on Aug. 26. . OF Jake Fraley missed his second straight game for personal reasons. Servais said Fraley would rejoin the team in Chicago on Monday.