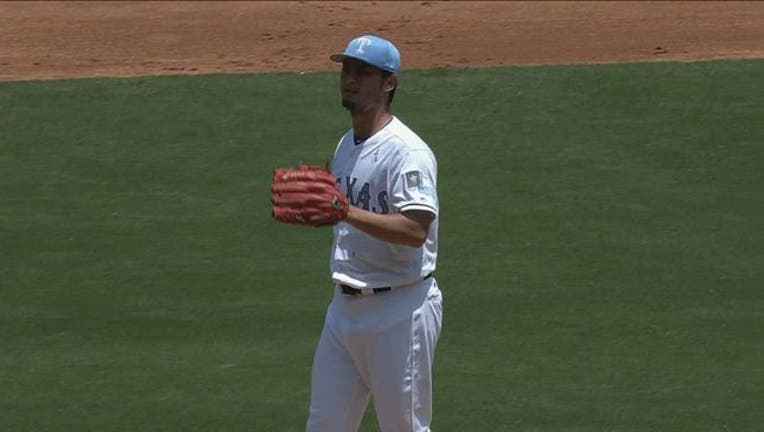 Danny Valencia's two-run homer capped a four-run first against Texas right-hander Yu Darvish (6-5), whom the Mariners beat for the first time in eight tries on the road. Seager had RBI doubles in the first, third and eighth innings for Seattle, which won in Arlington for the first time in its last nine games.

Bergman (4-4) permitted four hits and two runs in 5 2/3 innings after giving up nine runs in 2 2/3 innings in his last start in Minnesota.

The Rangers pulled within 5-3 against the bullpen in the seventh - an inning that featured a hit batter, three walks, a balk and a wild pitch - but Nick Vincent got Nomar Mazara to fly out with the bases loaded to end the threat.

The Mariners tacked on two runs in the eighth against Dario Alvarez.

Rangers manager Jeff Banister was ejected in the second inning by crew chief Joe West after Seattle's Tyler Smith was awarded first base on a hit-by-pitch on a play that was originally ruled a foul ball.

Darvish was coming off his best outing of the season - one hit and one run allowed in seven innings against Houston on Monday night - and he was one out away from getting out of the first unscathed. Seager's double scored one run, a second came in on a passed ball and Valencia blasted a 3-1 pitch into the Mariners bullpen in left-center.

Darvish pitched five innings and gave up five runs, the most he's allowed in a start since Sept. 17.

Carlos Gomez hit a two-run homer off Bergman in the second inning and finished the series with eight RBIs after returning from the disabled list on Friday.

Banister wasn't around to see that after he was tossed in the top half of the inning. Home plate umpire Hunter Wendelstedt had initially said Darvish's pitch hit Smith's bat, but he changed the call after Smith's pleading. Banister confronted Wendelstedt and was in the process of walking back to the dugout when West approached, sparking a more animated conversation and the ejection.

Mariners: RHP Felix Hernandez (right shoulder inflammation) will return to the Mariners rotation on Friday against Houston. Hernandez allowed four singles and struck out eight in six shutout innings in his second rehab start with Triple-A Tacoma on Saturday. RHP Hisashi Iwakuma (right shoulder inflammation) is also expected to return to the rotation during the weekend series.

Mariners: Seattle returns home to face Detroit in a four-game series, with RHP Sam Gaviglio (3-1, 3.41) making his first career start Monday against the Tigers. Gaviglio is 3-0 in his last four starts.

Rangers: Texas renews its rivalry with Toronto, hosting a four-game series. Austin Bibens-Dirkx (2-0, 3.28) makes his third career start and his second career appearance against the Blue Jays. He gave up three runs in a four-inning relief appearance on May 26.