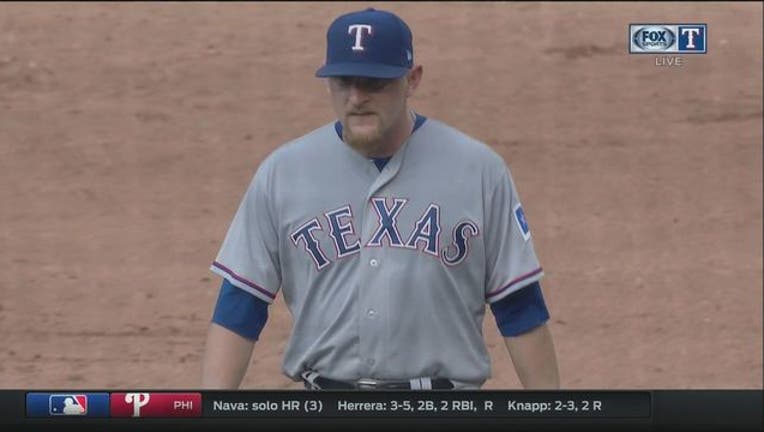 WASHINGTON (AP) - Max Scherzer struck out 10 to move past 2,000 for his career, but was outpitched by Austin Bibens-Dirkx and the Texas Rangers beat the Washington Nationals 5-1 on Sunday for a sweep of their weekend series.

By the end of the eighth, the Rangers had rallied on just one hit, aided by an error and a passed ball.

Bibens-Dirkx (2-0) allowed a run and three hits in seven innings in his second career start. The 32-year-old rookie retired 19 straight after Brian Goodwin's first career leadoff homer and a single by Bryce Harper.

Shin-Soo Choo slugged his 10th homer and second in as many games as Texas completed its first road sweep of the season.

Scherzer reached the 2,000 mark when he got Nomar Mazara swinging a 1-2 slider that tailed inside to open the fourth inning.

He struck out the side in the fifth and cruised until the eighth, when he exited after Delino DeShields reached on third baseman Anthony Rendon's error and Jurickson Profar walked.

Bibens-Dirkx was sailing along before Rendon singled in the seventh. Adam Lind followed with a walk. After a visit from pitching coach Doug Brocail, Bibens-Dirkx got Wieters to ground out to end the threat.

In terms of innings pitched (1,784), Scherzer is the third-fastest to hit 2,000 strikeouts behind Pedro Martinez and Randy Johnson.

Rangers: RHP Tyson Ross (thoracic outlet surgery) said he is ready to make his Texas debut after averaging 90 pitches over his last two rehab starts at Triple-A Round Rock. Manager Jeff Banister did not commit to a return date. "My expectation is that if all things go well, his next start would be in the big leagues," Banister said. "When that day is is undecided."

Nationals: Closer Koda Glover was placed on the 10-day disabled list with lower back stiffness. Glover blew his second save in Saturday's 6-3, 11-inning loss and afterward told manager Dusty Baker he had been dealing with "nagging" back pain all day. ... Ryan Zimmerman (back) was out of the starting lineup for the third game in four days.

Rangers: Begin a three-game series Monday at Houston. RHP Yu Darvish (5-4, 3.18 ERA) is winless with a 5.81 ERA in his last six outings against the Astros.

Nationals: RHP Stephen Strasburg starts the series opener against Atlanta on Monday. He's 6-1 with a 2.68 ERA against the Braves since 2015.