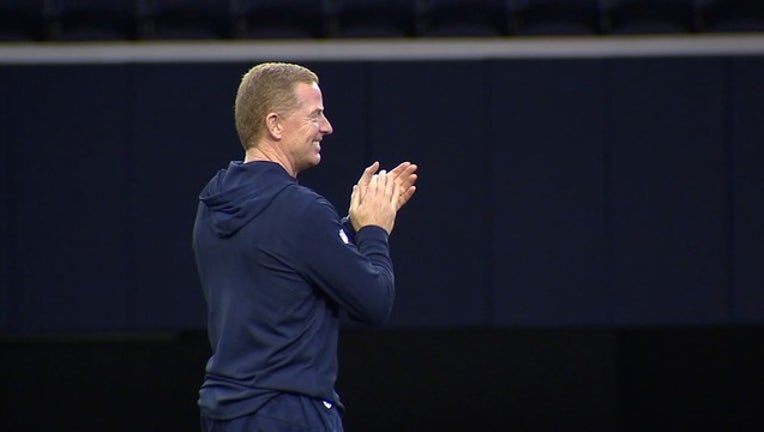 ARLINGTON, Texas (AP) - Drew Brees and the Saints have a chance to do something that should seem familiar to Dak Prescott and the Dallas Cowboys. If it happens, New Orleans might even have the NFC South title already in hand by the end of the week.

The record-setting quarterback will go for an 11th straight win after a season-opening loss in a visit to the Cowboys on Thursday night. That's exactly what Dallas did when Prescott and running back Ezekiel Elliott were rookie sensations in 2016.

It won't be a franchise record the way it was for Dallas. The Cowboys might remember when New Orleans started 13-0 on the way to a Super Bowl title nine years ago, because they won on the road to start the Saints' season-ending three-game skid.

The Saints can't afford a similar slump if they want the NFC's top seed, which Dallas had with 13 wins two years ago. The Los Angeles Rams enter the week with the same 10-1 record. But New Orleans can wrap up the division title with four games remaining with a win and a Carolina loss at Tampa Bay on Sunday.

"You don't begin to count, but then you start beginning to do the things that are necessary to win," said Saints coach Sean Payton, architect of the two longest winning streaks in franchise history. "Generally, if you are going to have a decent team, you are going to win some games in a row. It is going to be hard not to if you aspire to get into the postseason."

The Cowboys (6-5) have a modest three-game run, capped by a Thanksgiving win over Washington that vaulted them to a tie for the NFC East lead with the Redskins. Questions about the future of coach Jason Garrett have been replaced by talk of a second division title in three years.

"We have all the confidence in ourselves," said Prescott, coming off a season-high 289 yards passing. "They put on their pants the same way we do. They've won 10, and I guess we've won three (in a row). As I've said, we're going to take it one game at a time. That's all that matters."

Brees, less than two months shy of his 40th birthday, leads the NFL in completion percentage and passer rating. The 23-year-old Elliott feels like a rookie again, with a chance to match his career-best run of four straight 100-yard games from 2016, when he won the rushing title.

With three consecutive games of at least 120 yards rushing, Elliott has overtaken Todd Gurley for the league rushing lead.

"I feel like I'm in a good place right now," said Elliott, who has 1,074 yards to 1,043 for Gurley. "Coaches have been doing a great job of putting me in runs where I'm comfortable and just getting me going early and letting me get that momentum and being able to carry it through the game."

Brees, an Austin native, cherishes his Texas roots and wasn't about to downplay his latest chance to visit the Cowboys. "I can't say it's no big deal," said Brees, who was in high school during the Dallas Super Bowl dynasty of the 1990s. "I remember waking up every Sunday morning and watching the Cowboys after church. That was a big deal growing up. I played a state championship game in the old Texas Stadium."

The NFL's all-time leader in passing yards has some memorable road victories against the Cowboys, starting with a blowout in prime time his first year with New Orleans in 2006. There was also a dramatic Thanksgiving comeback in 2010. Now he's having one of his best seasons. "I feel like we've had some really good teams when we played them," he said. "I feel like there's always been a lot at stake."

Dallas' trade for new No. 1 receiver Amari Cooper is paying immediate dividends. Not only is the offensive efficiency much better, but Cooper is among the NFL's first-down conversion rate leaders for receivers since coming over from Oakland for the Cowboys' 2019 first-round pick.

Cooper's 180 yards against Washington were a team Thanksgiving record, and the 90-yard touchdown tied for the third-longest catch in club history. "When you are a great player like him and you get separation and run routes, it makes my job easy," Prescott said. "So when you have that, give credit to him."

The Cowboys have the fourth-best scoring defense in the NFL at 19.3 points per game. But the Saints have outperformed Dallas in that category the past three weeks, winning by an average score of 43-13, capped by a 31-17 Thanksgiving win over Atlanta . The Cowboys have allowed an average of 21 points during their winning streak.

"Their defense is definitely playing really well right now, so we have to do a good job of possessing the ball, running the ball, try to give our defense some breaks because we know what they have on the other side," Cowboys right guard Zack Martin said.