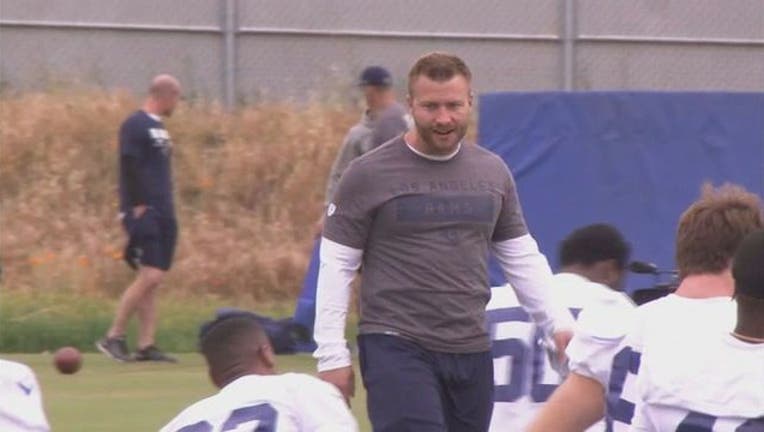 NEW ORLEANS (AP) - One way or another, the NFC Championship between the Los Angeles Rams and New Orleans Saints will be won by a coach named Sean - with an Irish surname - who designs and calls plays for one of the most innovative and productive offenses in the NFL.

The ties between the Saints' Sean Payton and the Rams' Sean McVay go well beyond a shared name.

"We both cut our teeth in this league under Jon Gruden," Payton said. "That (Rams) staff - there's a ton of guys that we're friendly with and that we know on that staff. Guys who we have worked with, and Sean and I have a real good relationship. He is an engaging guy, a fun guy to be around."

Gruden, the current Oakland Raiders coach, was the offensive coordinator with the Eagles in 1997 when Payton was hired as quarterbacks. In 2008, Gruden was the head coach in Tampa Bay when he hired McVay as a receivers coach.

During the past two seasons Payton and McVay have each led their teams to the playoffs with one of the best offenses in football, thanks in part to elite quarterbacks - Drew Brees with New Orleans (14-3) and Jared Goff of Los Angeles (14-3).

Both coaches have acknowledged they watch each other's offensive film nearly every week - not just because of the possibility of playing against one another; they're looking for good ideas.

And then there are some connections on the roster and coaching staff. One of the Rams' top receivers, Brandin Cooks, was Payton's first-round draft choice in 2014. Los Angeles' running game coordinator is Aaron Kromer, a former running backs and offensive line coach under Payton, including on the 2009 Super Bowl-winning squad.

Players on both teams praise their coach's intangible feel for how a game is developing.

Saints Pro Bowl left tackle Terron Armstead extoled Payton's "fearlessness" in his play calling and said the coach has "so much believe and confidence in us and the system that we can go out and make a play no matter the down and distance."

Goff mentioned how McVay sends in plays "with confidence and having a good feel for everything."

The same goes for their QBs: the record-setting Brees turned 40 on Tuesday and Goff is 24.

"He's been doing it at really high level for a lot longer than I have," McVay said of Payton. "He's an outstanding coach - clearly referenced by the way that his team is playing this year, how they've played over the course of his career when he's been leading the Saints. So, I don't think we're in that category yet. We've got to do things for a lot longer to be able to be mentioned in that same breath."

Getting to a Super Bowl by winning Sunday would be a good start for McVay and the Rams, whose first loss this season came when they last visited the Superdome on Nov. 4 and fell 45-35.

Here are some other story lines surrounding the high-stakes rematch:

New Orleans placed top defensive tackle Sheldon Rankins on injured reserve this week after he tore his Achilles last Sunday against Philadelphia . Not only was the 2016 first-round draft choice the anchor of a defensive front that helped the Saints rank No. 2 in the NFL in stopping the run, but he also ranked second on the club with eight sacks. Without his trademark mix of quick spin moves, powerful bull rushes, and ability to draw double-teams, the Saints will rely more on tackles David Onyemata and Tyeler Davison, along with rookie Taylor Stallworth and recently signed veteran Tyrunn Walker.

Brees carved up the Rams' defense for 346 yards passing and four TDs in the teams' first meeting, but the Rams have reason to believe they can do better this time. Star cornerback Aqib Talib was injured and missed the game in November, but he is back in uniform. Los Angeles typically doesn't line up cornerbacks against specific receivers, but defensive coordinator Wade Phillips could consider it to get Talib against Michael Thomas, who had 211 yards receiving largely against Marcus Peters in the last meeting. Phillips also has two additional months of experience using edge rusher Dante Fowler, who had just arrived in a trade with Jacksonville for the last meeting.

Since Payton and Brees joined forces in 2006, the Saints have gone 6-0 in playoff games in the Superdome, including two wins the season they won the Super Bowl. Payton suggested that the environment in the dome - while not an overwhelming factor - is nonetheless a factor that can influence an opposing offense in particular.

While most of the Rams haven't had much success at the Superdome, left tackle Andrew Whitworth made his share of fond memories there. The West Monroe, Louisiana, native won three high school state championships in the arena, and then he added a national championship with LSU when the Tigers won the Sugar Bowl over Oklahoma in January 2004. The 37-year-old Whitworth, a versatile blocker and locker-room leader, has been a major key to the Rams' offensive success over the past two years. One week after getting his first career playoff victory , he'll try to reach his first Super Bowl.