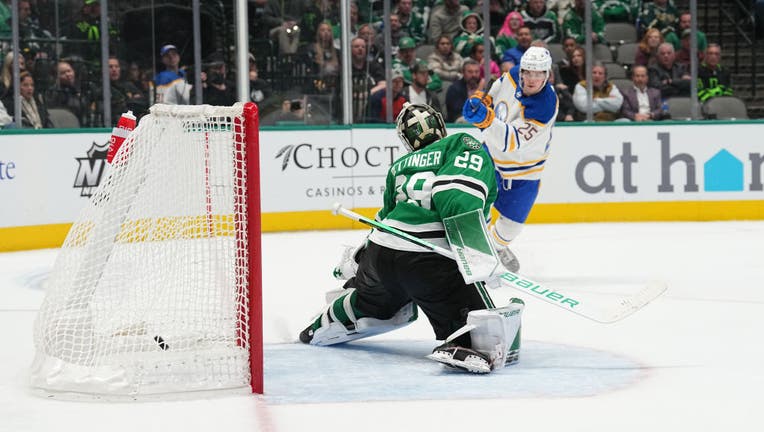 DALLAS, TX - JANUARY 23: Owen Power #25 scores a game-winning goal against the Dallas Stars at the American Airlines Center on January 23, 2023 in Dallas, Texas. (Photo by Glenn James/NHLI via Getty Images)

DALLAS - Rookie defenseman Owen Power scored his first goal of the season 56 seconds into overtime and 41-year-old Craig Anderson stopped 29 of 31 shots in his 700th career NHL appearance as the Buffalo Sabres beat the Dallas Stars 3-2 on Monday night.

Rasmus Dahlin and Victor Olofsson also scored for the Sabres, who have won three consecutive games. Seeking their first playoff berth since 2011, the Sabres moved within three points of the East’s second wild-card position.

Power was eight days old when Anderson made his NHL debut on Nov. 30, 2002 with the Chicago Blackhawks.

"You just keep chugging along," said Anderson, who made multiple point-blank saves during the first 10 minutes when Dallas took a 1-0 lead and outshot Buffalo 10-0. "Whatever the milestone might be, the milestone is. The love of the game is for real. It doesn’t feel like it’s been that long."

"He’s had a lot of years in the NHL and there’s not going to be a lot of years left in the NHL for him," Sabres coach Don Granato said of Anderson. "He knows every moment’s special, and tonight was another one of those."

Power scored from the right circle off a pass from Tage Thompson, who had two assists, seconds after hitting a goalpost.

Jamie Benn and Jason Robertson scored for the Stars, who had shutouts in their last two. Jake Oettinger made 22 saves. Earning one point, Dallas moved one point ahead of the Winnipeg Jets for the Central Division lead.

"I’m going to go glass half full," Stars coach Peter DeBoer said. "We’ve been playing a lot of good hockey and found a way to get an important point."

Benn opened the scoring at 1:48, and 25 seconds into a power play, with a second-effort tap-in at the far corner of the net following a skate save off a centering pass by Roope Hintz, who missed Dallas’ previous seven games with an upper-body injury.

Dahlin’s one-time blast from the high slot tied the score at 1 midway through the period.

Olofsson converted on a 3-on-2 break with a one-timer from the right circle 1:44 into the third period to put Buffalo ahead 2-1.

Robertson scored at 5:58 to tie the score at 2 after collecting a puck on the doorstep centered by Joe Pavelski, who assisted on both Dallas goals.

Robertson is tied for fourth in the league with 65 points; Thompson is sixth with 63. Robertson has 32 goals, tied with Thompson and Colorado’s Mikko Rantanen for third place in the league.

Referee Furman South had to leave the game early in the second period for medical attention after Buffalo’s Peyton Krebs caught him in the chin with his stick. Referee TJ Luxmore went solo but only for a few minutes before South rejoined him.

The Sabres are 6-3 in games decided in overtime, the Stars 2-6. … It was Benn’s 19th goal this season, one more than the 2015 Art Ross Trophy winner scored last season. … Dahlin has a career-high 14 goals this season with 53 points, matching last season’s career-best total. The first overall draft pick in 2018 went into play second in points among defensemen behind San Jose’s Erik Karlsson (62).

Sabres: Will complete a road back-to-back on Tuesday against the St. Louis Blues.

Stars: Will host the Carolina Hurricanes on Wednesday in the third of four consecutive home games going into the All-Star break – followed by four more home games coming out of the break.