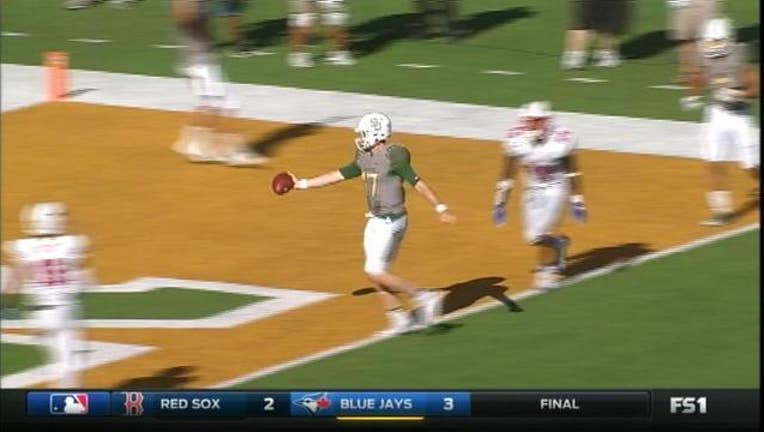 WACO, Texas (AP) — Seth Russell threw for 261 yards and two touchdowns and ran for another score, and No. 23 Baylor recovered from a slow start to rout SMU 40-13 on Saturday.

Russell and the Bears (2-0) struggled offensively in the first half and had to settle for a 6-6 tie at intermission, but broke through with a 20-point third quarter on their way to a 13th straight victory over their former Southwest Conference rival.

Baylor missed on several deep shots in the first half, but Blake Lynch capped its opening march after halftime by breaking free in the right seam for a 31-yard touchdown reception from Russell, who added a 19-yard scoring burst on a scramble on the Bears' next possession. Russell was 26 of 47 with two interceptions.

Orion Stewart intercepted two passes for Baylor. The first was in the end zone to stop a promising SMU threat, and he returned the second 33 yards for a touchdown to push Baylor's lead to 26-6.

Redshirt freshman quarterback Ben Hicks made his first career start for SMU (1-1) in place of senior Matt Davis, who missed the game for undisclosed reasons. Hicks helped the Mustangs to 405 yards total offense, but he was intercepted three times — twice in the end zone — and SMU scored only one touchdown in five trips inside the 20.

Hicks threw for 144 of his 229 yards in the first quarter, and connected with Courtland Sutton for SMU's only touchdown, a 20-yarder, in the third quarter.

SMU: The Mustangs were much more competitive than they have been in their last three meetings with Baylor in which they were outscored 160-45. But they still have a long way to go to compete with ranked teams. SMU gets another shot in a visit from No. 15 TCU on Sept. 23.

Baylor: It's a sign of how strong the Bears' offense has been in recent years that it gained more than 500 yards and still didn't look sharp for much of the game. Baylor turned the ball over three times and was 8 of 21 on third down, but still had plenty of firepower to pull away in the second half.

SMU: The Mustangs' schedule lightens up next week when they welcome FCS school Liberty to Dallas for their home opener.

Baylor: The Bears have a short week before playing their second Friday night game of the season and first road contest against Rice.