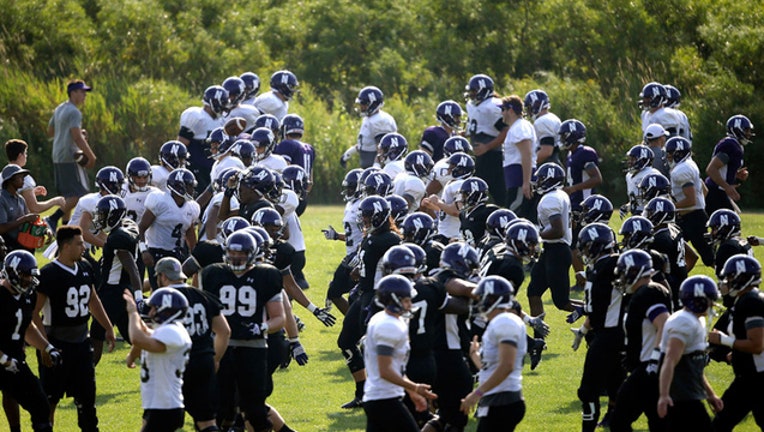 CHICAGO (AP) — The National Labor Relations Board on Monday threw out a historic ruling that gave Northwestern University football players the go-ahead to form the nation's first college athletes' union, saying the prospect of union and nonunion teams could throw off the competitive balance in college football.

The decision dismissed a March 2014 decision by a regional NLRB director in Chicago who said that the football players are effectively school employees and entitled to organize. Monday's decision did not directly address the question of whether the players are employees.

"Although we do not decide the issue here, we acknowledge that whether such individuals meet the board's test for employee status is a question that does not have an obvious answer," the NLRB said.

The labor dispute goes to the heart of American college sports, where universities and conferences reap billions of dollars, mostly through broadcast contracts, by relying on amateurs who are not paid. In other countries, college sports are small-time club affairs, while elite youth athletes often turn pro as teens.

The unanimous ruling by the five-member National Labor Relations Board concludes that letting Northwestern football players unionize could lead to different standards at different schools — from the amount of money players receive to the amount of time they can practice. That would, it says, create the competitive imbalances.

The ruling applies to private schools like Northwestern, which is a member of the powerful Big Ten Conference. Public universities do not fall under the agency's jurisdiction, though union activists have said they hope Northwestern's example inspires unionization campaigns by athletes at state schools.

Northwestern became the focal point of the labor fight in January 2014, when a handful of football players called the NCAA a "dictatorship" and announced plans to form the first U.S. labor union for college athletes. Quarterback Kain Colter detailed the College Athletes Players Association at a news conference, flanked by leaders of the United Steelworkers union that has lent its organizing expertise and presumably will help bankroll the court fight.

Regional NLRB Director Peter Sung Ohr issued a stunning decision three months later, saying Northwestern football players who receive scholarships fit the definition of employees under federal law and therefore should be able to unionize. A month later, football players cast secret ballots on whether to unionize. Those ballots were sealed during the appeal and will now be destroyed.

Former Northwestern receiver Kyle Prater said he voted against the union proposal, saying that he and his teammates were well treated during their college years.

But, Prater, who now plays for the New Orleans Saints, said he still feels there are "some things as far as the NCAA that need to be more structured. And I think by what we did, our voice out there really helped get things going forward."

Monday's seven-page ruling cites federal law and contends that unionized football players at Northwestern would not promote the "uniformity" and "stability" between workers and management that it says is the goal of U.S. labor relations law.

While NLRB decisions are sometimes split, the three Democrats and two Republicans on the board all agreed.

Under U.S. law, an employee is regarded as someone who, among other things, receives compensation for a service and is under the direct control of managers. In Northwestern's case, Ohr concluded coaches are equivalent to business managers and scholarships are a form of pay.

The ruling was welcome news for the NCAA, the dominant umbrella organization for U.S. college athletics. The NCAA has been under increasing scrutiny over its amateurism rules and has been in court fighting lawsuits from former athletes over everything from head injuries to revenue earned based on the use of their likenesses in video games.

The NCAA recently cleared the way for the five biggest conferences, including the Big Ten, to add player stipends to help athletes defray some of their expenses. Southeastern Conference schools, for example, will give some athletes $3,000 to $5,500 each on top of a scholarship that pays for tuition, room, board and books.

Northwestern, the Big Ten and the NCAA all argued against the unionization effort, saying that lumping college athletes into the same category as factory workers would transform amateur athletics for the worse. At one point, Northwestern administrators sent a document to players outlining potential pitfalls, noting that player strikes could lead to the spectacle of replacement players.

The specific goals of the players association, or CAPA, include guaranteeing coverage of sports-related medical expenses for current and former players, reducing head injuries.