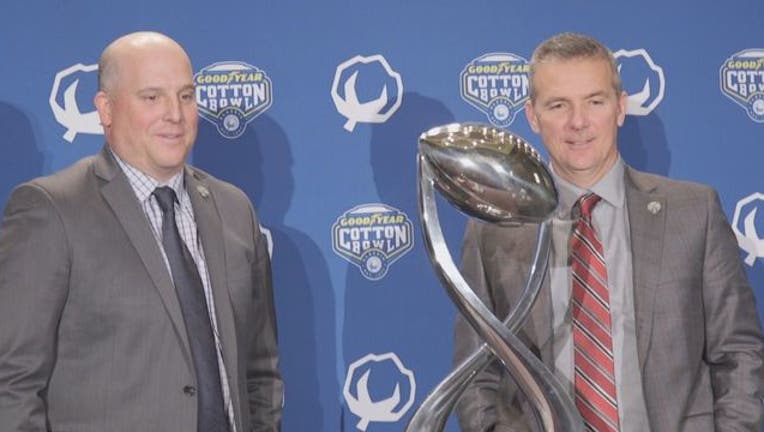 ARLINGTON, Texas (AP) - Coach Urban Meyer could have easily stoked a debate about expanding the four-team College Football Playoff after his Buckeyes were the first team left out this season.

Instead, he focused - as much as he could - on the Cotton Bowl matchup Friday night against Southern California, another conference champion.

"We're on the outside looking in twice. We're in the playoff twice, and twice we're right on the edge of not being in it. If they extended the playoff ... but I don't see that happening," Meyer said Thursday. "College football is just hitting on all cylinders right now, so I don't know how much I'd change."

The Big Ten-winning Buckeyes won the first championship in the four-team CFP era three years ago. That game was at AT&T Stadium, where Ohio State (11-2) returns Friday night to play Pac-12 champion and No. 8 Southern California (11-2) in the second Cotton Bowl for both teams.

USC coach Clay Helton mostly agreed with Meyer after initially deferring to Ohio State's coach with CFP experience to first answer the question posed about if it was time to consider an eight-team playoff.

"The playoff system has been great for our game," Helton said. "You're talking about two teams that were in that controversy and in that discussion right down to the end, and have the ability to have this game against two really premier teams in the country. That's what you focus on."

Had the Rose Bowl not been a CFP semifinal this season, the Trojans and Buckeyes almost certainly would have been spending this week in Pasadena, California. The Rose Bowl traditionally hosts the Big Ten and Pac-12 champions, but this year will host Oklahoma and Georgia for a bid in the Jan. 8 title game.

Instead, the two powerhouse programs with more than 1,700 wins combined meet in another traditional bowl. The Cotton Bowl is being played for the 82nd time, the ninth since moving from its namesake stadium to the home of the NFL's Dallas Cowboys.

This is the eighth time Ohio State and USC have played in a bowl game. The first seven were all in the Rose Bowl, the last coming 33 years ago.

"This is just a classic, classic matchup on every level," Helton said, mentioning the schools, teams and bands. "I think it's great for college football for this to be able to happen and to happen right here in the Cotton Bowl."

A few things to know about the first Cotton Bowl in 31 years to match conference champions:

This is could be the final game at USC for third-year sophomore quarterback Sam Darnold , an expected top NFL pick who hasn't said yet if he will return to the Trojans or declare for the draft. He has until Jan. 15 to decide. The All-Pac-12 QB has thrown for 6,873 yards with 57 touchdowns and 21 interceptions in his two seasons.

"He looks like he's from Texas. He's definitely a hard runner, he's going to have a bright future," Jones said before making a bulking-up motion. "He's just built. ... He's been eating good. I should have gotten on his diet back when I was a freshman."

J.T. Barrett, Ohio State's winningest quarterback with 37 wins as a starter, will play his 50th and final game with the Buckeyes. Barrett is from Wichita Falls, Texas, about a two-hour drive from AT&T Stadium, and acknowledged that it is cool to play his last game near home.

Ohio State and USC are both playing at the Cowboys' stadium for the second time . The Buckeyes beat Oregon 42-20 for the national championship three years ago. The Trojans lost their 2016 season opener there, 52-6 to defending national champion Alabama. They recovered from their most-lopsided loss in a half-century to finish last season as Rose Bowl champs.

While Meyer has a national title, he still hasn't been to the Rose Bowl in his six seasons as Ohio State's coach. "Hopefully get there some day," he said. Meyer was a graduate assistant on the Buckeyes staff for their only other Cotton Bowl.