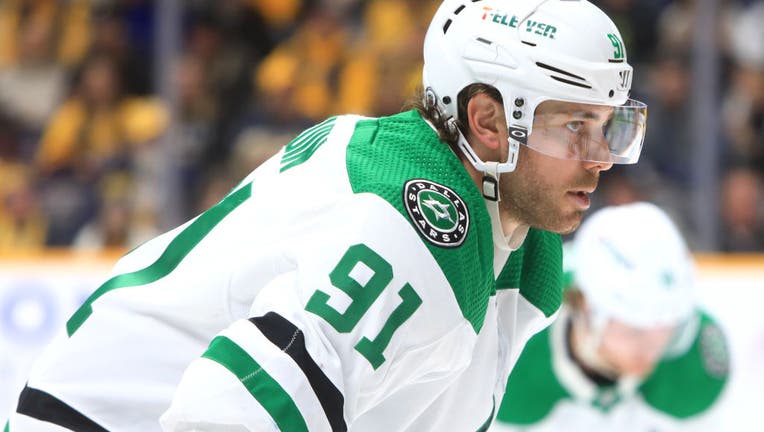 NASHVILLE, Tenn. - Roope Hintz scored his second goal of the game with 52.3 seconds left to give the Dallas Stars a 3-2 victory over the Nashville Predators on Tuesday night.

Jamie Benn had a goal and an assist and Jake Oettinger made 26 saves for the Stars, winners of three of four.

"I loved our first coming out of the break, traveling this morning," Dallas coach Peter DeBoer said. "In the second we gave the game back a little bit, and then I thought we recovered and reset and got our game back in the third the way we want to play."

"It’s tough anytime you lose a game, particularly late like that when it’s tied," Nashville coach John Hynes said. "Anytime you lose it stings, but I think it stings a little bit harder right at the end like that where you’ve battled and done some things and found a way to be a tie game at that point in the game. To come away with nothing is disappointing."

In the final minute, Hintz found a loose puck on the right side and fired it by Saros.

"I was kind of waiting there for that bounce," Hintz said. "When it came, I just tried to get it as (high) as possible."

Benn scored the game’s first goal at 1:19 of the opening period.

Tyler Seguin forced a turnover inside the Nashville blue line and the puck came to Benn, who fired a wrist shot past Saros on the glove side for his 14th goal.

The goal was the 343rd of Benn’s career, placing him alone in second place on the franchise’s goals list. Mike Modano holds the franchise record with 434.

With the teams skating 4-on-4, Mattias Ekholm banked a pass off of the boards to Alexandre Carrier, whose shot was turned aside by Oettinger, but Forsberg was in front to bury the rebound.

With Dallas on a power play, Hintz redirected Jason Robertson’s shot from the center of the blue line, giving the Stars a 2-1 lead at 2:15 of the second.

Robertson extended his points streak to five games. He has one goal and seven assists over that stretch.

Trenin tied it again at 8:15 of the second with a short-handed goal off of a wrist shot from the slot that went in just underneath the crossbar.

Stars left wing Frederik Olofsson made his NHL debut. The 26-year-old Olofsson became the third Star to make his NHL debut eight-plus years after being drafted.

Olofsson was selected in the fourth round (98th overall) in 2014 by the Chicago Blackhawks. He had three shots on goal in the game in 9:16 of ice time.

"I thought he was good," DeBoer said. "I think that’s what we’re looking for a guy coming up and in the lineup. He was solid defensively, he created some things offensively. He didn’t get as much ice time as I would have liked or probably deserved, but he can build on that."

Predators forward Matt Duchene missed the due to what the team called, "Baby reasons." Duchene and wife Ashley welcomed daughter Ellie Jo into the world earlier in the day.

Prior to the holiday break, Duchene scored a goal in each of his last four games, equaling a career high. Duchene scored in four-straight two other times in his career.

Predators: At Anaheim on Friday night.