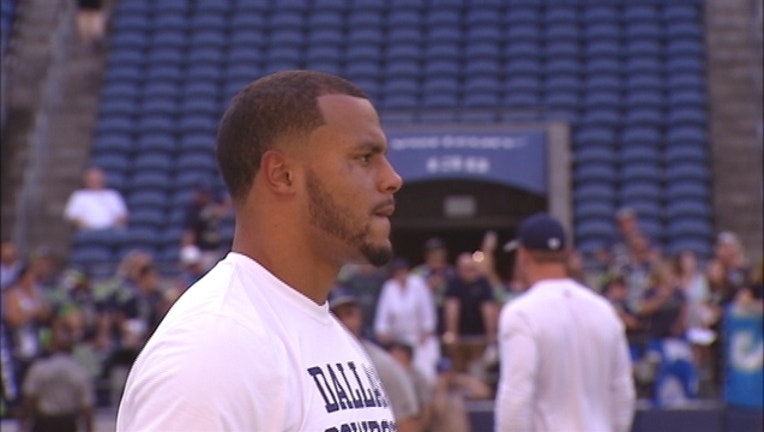 FRISCO, Texas (AP) — Dak Prescott didn't want to take a break in practice three days before his debut as a rookie starter for Dallas.

The quarterback suddenly thrust into the spotlight by yet another injury to Tony Romo wasn't happy with his footwork on the drill that had just finished, so he asked offensive coordinator Scott Linehan for a few more snaps.

It's one illustration why the Cowboys believe they can survive a few games without Romo after the 36-year-old's fourth back injury in less than four years — and why they believe they might have found a future beyond their 10-year starter.

In Sunday's opener at home against the New York Giants, Prescott will be the first rookie starter at quarterback in Week 1 for the Cowboys since Quincy Carter 15 years ago.

Throw in running back Ezekiel Elliott, and the Cowboys have the first such rookie combo starting an opener since Roger Staubach and Calvin Hill in 1969.

Elliott was expected to be a starter. Prescott wasn't.

The career passing leader at Mississippi State started training camp as an afterthought, the third quarterback behind Romo and Kellen Moore.

Not only was he a fourth-round pick, but was taken after owner and general manager Jerry Jones had expressed regret that he couldn't get a deal done to move into the first round to get Paxton Lynch, who went to Denver and will be a backup when the season starts.

Early in camp, Moore went down with a broken right ankle that ultimately ended his season, lifting Prescott to the backup role. Then Romo broke a bone in his back when was tackled awkwardly on the third play of the third preseason game at Seattle.

By the time Romo got hurt, Prescott already had two impressive preseason showings. And the jolt of having to come off the bench much earlier than expected against the Seahawks didn't bother him either. The 23-year-old led a scoring drive on his first full possession.

"Tony's injury and him not starting Sunday is a setback, make no mistake about it," Jones said.

"On the other hand, I didn't expect Dak to come in and have the kind of offseason he had and build the kind of confidence he's done with the staff and with his teammates. That has tempered the setback."

As Prescott zoomed up the depth chart, his answers didn't change much. Walked in the door wanting to one day be the starter. Kept preparing the same way, other than getting a lot more snaps in practice.

The biggest difference: Instead of watching Romo, he's listening to him, along with Moore and Mark Sanchez, the veteran signed as his backup this week.

"What Tony did before he got hurt helped me enough," Prescott said. "Just telling me things as practice went on, on and off the field, in the film room. When you have vets around me like I do, you feel good going into a game."

And Prescott will still have vets with him in the huddle, namely 2014 All-Pro receiver Dez Bryant, who is healthy after a broken foot in last year's opener against the Giants slowed him for the rest of the season. Jason Witten enters his 14th season as one of two tight ends in NFL history with at least 1,000 catches and 10,000 yards.

Prescott had touchdown passes to both in the preseason.

"Dak's in a real fortunate situation for him to be put in this situation with a veteran offensive group," Linehan said.

"We have the ability, I think, because of having an offense that has such maturity, that you can put this young player in there and he can continue to be more like himself and not have to carry so much of the burden."

He's handled everything so far. Now Prescott gets to see how it translates to the regular season.