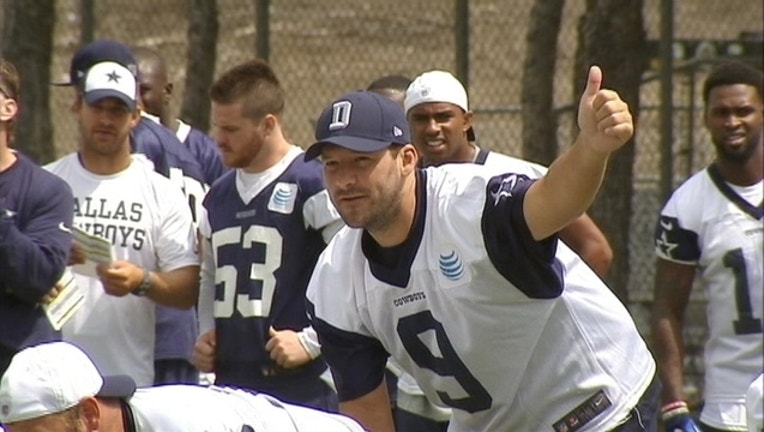 IRVING, Texas (AP) — Tony Romo skipped practice Wednesday and sounded as if he'll keep doing it after the same approach last season made the Dallas quarterback feel fresher on Sundays.

It's all about the 35-year-old Romo managing his surgically repaired back, and how the Cowboys can help that process. Running the ball the way they did a year ago with NFL rushing champion DeMarco Murray also makes a big difference.

The success with Murray helped Romo to league and career highs in completion percentage and passer rating — and boosted the Cowboys to the NFC East title and their first playoff win since 2009. With Murray now a division rival in Philadelphia, Dallas needs suitable alternatives or else runs the risk of testing the limits of Romo's back.

Romo will start his ninth opener for the Cowboys on Sunday night against the New York Giants, and he's coming off his first normal offseason since 2012 after back surgeries limited him the past two years.

In some ways, though, this offseason was similar in that Romo constantly communicated with coaches and medical personnel, and still sat out practices at training camp just because he's wary of overworking himself. For him, a day in the weight room or doing other exercises on his back is as valuable as time on the field with All-Pro receiver Dez Bryant and company.

"It's been a process that we've looked at and analyzed and went over and over," Romo said. "Obviously, you always want to be out on the football field, but the less torque I have to throw during the week is going to allow me to be a little bit better on Sunday."

Romo and Bryant haven't been on the field together since Bryant's much-debated catch that wasn't last January, a pivotal moment in a divisional round loss to Green Bay that kept the Cowboys from winning multiple playoff games for the first time since their last Super Bowl title after the 1995 season.

Bryant missed the offseason in a contract stalemate, then injured a hamstring early in camp. The Cowboys took a cautious approach with him the rest of the preseason, even holding him out of the third exhibition game when it looked as if he would get at least a few snaps with his quarterback.

"We're not trying to pick up where we left off. We hope to be better," Romo said about himself and Bryant, who led the NFL with 16 touchdowns receiving last season. "Even though you've got a lot of the same guys, people get a year older, a year better in the system — you've got to figure it all out."

Coach Jason Garrett has no doubt they will.

Romo, one of two undrafted quarterbacks set to start an NFL opener this week, will match Roger Staubach for second in franchise history, three opening-day starts behind Troy Aikman. Romo has passed Aikman for the club records in yards and touchdowns and should add completions this year if he stays healthy.

"I'm just a much different player than I was before, so when you look at it, your goal is to be a better player than you were the year before," Romo said. "It's probably one of the things that I'm most proud of, that I always kept improving and I like to think that I've continued to do that. Hopefully this season will be no different."

The Cowboys hope to help make him better.