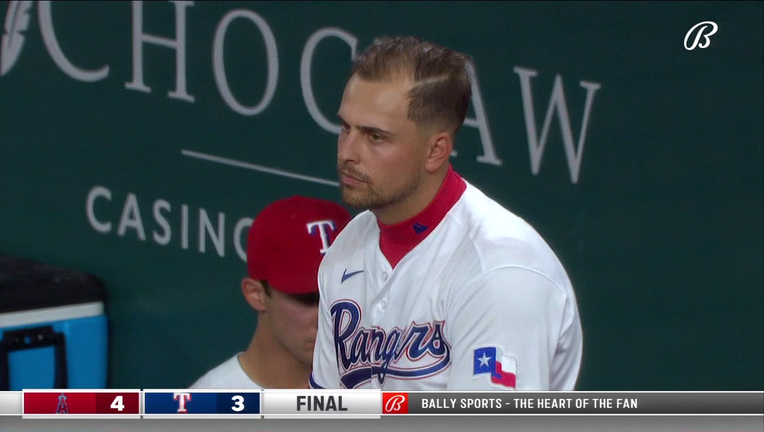 ARLINGTON, Texas - Rookie Chris Rodriguez pitched 3 1/3 shutout innings for the win, and Anthony Rendon and Jose Iglesias hit two-run singles in the first to lead the Los Angeles Angels over the Texas Rangers 4-3 on Wednesday night.

Rodriguez (2-0) entered to begin the third inning after Alex Cobb allowed three runs and six hits, including two-out RBI singles by Nate Lowe and Willie Calhoun. The 22-year-old right-hander walked none and allowed only a one-out single to Adolis García, his final batter in the sixth inning.

Tony Watson followed and got David Dahl to hit into a double play.

Rodriguez’s innings and 42 pitches were the most in his seven-game big league career, which began April 2. He got his first big league win Sunday with a scoreless inning against Houston.

Four relievers combined for seven innings of scoreless, two-hit relief. Mike Mayers struck out García to strand runners at the corners in the eighth, and Raisel Iglesias pitched a perfect ninth for his fourth save in five chances.

Los Angeles took two of three in the series.

Dane Dunning (1-1) gave up four runs and six hits in five innings. He had been knocked out Friday in a five-run third against the Chicago White Sox.

MISSED IT BY THAT MUCH

Angels DH Shohei Ohtani doubled off the top of the left-field wall in the second inning. Manager Joe Maddon asked for a video review, trying for a home run, but the call on the field was confirmed.

It was Cobb’s shortest start since Sept. 11, 2018, when he came out after two innings against Oakland because of a blister. ... Rangers RF Joey Gallo went 0 for 4 after opening the season reaching base in his first 23 games. ... Angels regulars Albert Pujols and Justin Upton (11-game hitting streak) were given a scheduled off day going into Thursday’s off day. ... Ohtani’s next pitching start is scheduled for Monday vs. Tampa Bay, a normal turn in a six-man rotation.

Rangers: OF Khris Davis (strained quadriceps) could be activated before the May 7-9 home series vs. Seattle. Davis returned to the alternate training site on Wednesday. … 1B Ronald Guzman and C Sam Huff each had surgery on his right knee Wednesday,