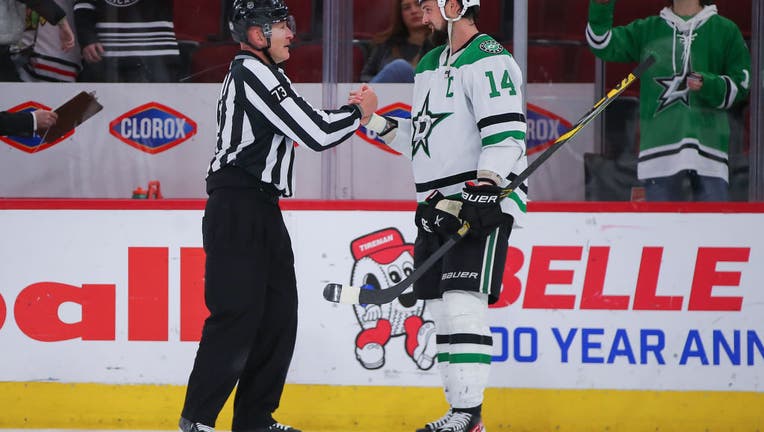 CHICAGO - Jason Robertson scored his team-leading 33rd and 34th goals about three minutes apart, and the Dallas Stars strengthened their hold on a wild-card spot with a 6-4 win over the Chicago Blackhawks on Sunday night.

Robertson’s first goal snapped a 3-all tie with nine minutes left in the second. He then beat Chicago goalie Kevin Lankinen with a perfect screened shot with 5 1/2 minutes left, allowing Dallas to take charge of what had been a seesaw contest and giving Chicago its seventh straight defeat (0-5-2)

Jake Oettinger made 36 saves, Roope Hintz had a goal and two assists, and Joe Pavelski, Tyler Seguin and Jamie Benn each added a goal and an assist to help Dallas rebound from a rough 3-1 loss at home to New Jersey on Saturday.

The Stars weren't perfect, but were much better in this one — especially after Robertson gave them a two-goal advantage.

"It's easier playing with the lead," Pavelski said. "It was going back and forth and was one of those nights where you saw the puck going in the net in different ways. We let one slide the other night.

"It was a good effort from the guys. We had a lot of good stuff going."

Ryan Suter and Miro Heiskanen had two assists each for the Stars, who improved to 41-27-4 (86 points) and moved two points ahead of Vegas for the second Western Conference wild card. Dallas is one point behind Nashville, which is in the top wild-card spot..

Dallas coach Rick Bowness was a lot happier a day after this team allowed three goals in the third period to New Jersey.

"I was very proud of the guys the way they responded," Bowness said. "They came out ready to go. It was a really good effort by everybody.

"You've got to recover quick. You can't lose two in a row."

Philipp Kurashev and Jonathan Toews were credited with goals in the first period when their passes deflected in off Dallas defenseman Esa Lindell as he tried to break up plays. Kirby Dach and Boris Katchouk also scored for Chicago. Patrick Kane had two assists

Lankinen, who was shaky, allowed five goals on 20 shots through two periods. He was replaced at the start of the third by Collin Delia, who had nine saves.

"Definitely disappointing," Kane said. "I think there’s always a reason to play and be competitive. You’re always playing for something — pride or creating a good impression for yourself personally and for this group we have.

"But it would definitely be nice to mix in a win here."

Benn’s power-play goal 4:14 into the game opened the scoring. Alone in front, he flipped a rebound off Lankinen and into the net.

The Blackhawks took a 2-1 lead on the fluky goals by Kurashev and Toews. Lindell sprawled to cut off Kurashev’s pass to Toews on a 2-on-1, but the puck slid in off the Lindell’s body and past Oettinger at 8:09. Oettinger had moved across the crease in anticipation of a shot from Toews and couldn’t recover.

Toews made it 2-1 at 11:24 when his pass to Kirby Dach deflected in off Lindell’s stick in front of the net.

"I think he (Lindell) played it pretty well on both goals," Hintz said. "Something you can't do anything about that."

Pavelski tied it at 2 just over 2 minutes later on a power-play with a doorstep deflection of Tyler Seguin’s shot from the left circle.

Robertson put Dallas back ahead 2:02 later. After Hintz’s shot hit the back boards, Robertson banked the loose puck off Lankinen’s pads from the right side of the net.

Robertson made it 5-3 with 5:28 left in the second on a shot through traffic from the right boards that landed just inside the upper left corner of the net.

Seguins completed the scoring with 4:35 left in the third. It was his third goal in four games.

The Blackhawks' leading scorer Alex DeBrincat, Dylan Strome and recently acquired Taylor Raddysh skated together on a line. The three forwards were junior teammates with the Erie Otters of the Ontario Hockey League in 2014-15 and 2015-16.

Dallas swept the season series from Chicago, 3-0-0. … The 37-year-old Pavelski has 72 points. His career high is 79, set with San Jose in 2013-14. … Blackhawks F Dominik Kubalik was a healthy scratch for the second time this season. Expected to be a sniper, Kubalik has one goal in his last 15 games and just 12 this season. … Katchouk’s goal was his first with Chicago after being acquired from Tampa Bay at the trade deadline.