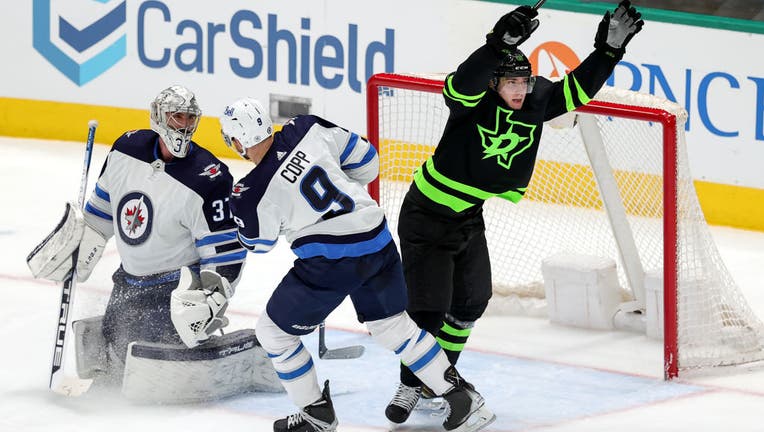 DALLAS, TX - FEBRUARY 11: Dallas Stars center Jacob Peterson (40) celebrates a goal he scored during the game between the Winnipeg Jets and the Dallas Stars on February 11, 2022 at the American Airlines Center in Dallas, Texas. (Photo by Steve Nurenb

DALLAS (AP) - Jason Robertson scored at 3:10 of overtime to give the Dallas Stars a 4-3 win over the Winnipeg Jets on Friday night.

Jacob Peterson, Tyler Seguin and Jamie Benn also scored for the Stars, who have won their first two games following the All-Star break, both at home, and have won seven of their last nine games dating to Jan. 20.

Benn also had an assist, and Jake Oettinger made 31 saves to run his home record this season to 12-3-0.

Robertson scored seconds after coming onto the ice, taking a pass in the slot from John Klingberg and following his own initial shot with a backhander just beyond the reach of a sprawling Connor Hellebuyck.

"I was able to shoot it and get the rebound and put it in," Robertson said. "It all happened pretty fast."

Robertson has 20 goals after scoring 17 last season, which tied for second among rookies. He has points in 15 of his last 16 home games and in eight of last nine games overall games.

Pierre-Luc Dubois, Jensen Harkins and Mark Scheifele scored for the Jets, who have lost eight of their last 10 (2-5-3). Scheifele also had an assist, and Hellebuyck stopped 31 shots.

"I like the fact we stayed in it, and we could get a point there at the end," Jets interim coach Dave Lowry said.

Scheifele sent the game into overtime with a 6-on-5 top-shelf goal with 31.9 seconds left in regulation.

Benn redirected a shot from Denis Gurianov, who had two assists to give Dallas a 3-2 lead with 7:13 left in the third.

Dubois, in his first game since Feb. 1, deflected a blast from the right point by Nate Schmidt just past Oettinger’s glove on the short side for the game’s first goal only 50 seconds into the second period. He came off the health protocols list but missed only one game because of the All-Star break.

The Stars responded with two goals in 56 seconds to take a 2-1 lead with 8:18 to play in the second. Peterson scored on a deflection off his left skate off a cross-ice pass from Alexander Radulov before Seguin scored on a 3-on-1 rush on a pass from Gurianov.

The Jets pulled even at 2-2 when Harkins buried a shot alone in the slot off a drop pass from Cole Perfetti with 3:39 left in the middle period.

Oettinger is 19-4-5 in career home games. The 23-year-old made his fourth straight start, his longest starting stretch this season.

Benn added to the scoring prerequisites with a five-minute major late in the second period. He took on Brenden Dillon, a former Star, after Dillon’s hard hit decked Klingberg.

"My team comes first," Benn said. "I care about my players."

"That represents what we’re all about," Bowness said.

Benn also fanned on an open net six minutes in, popping a shot over the crossbar.

"Things like that happen," he said. "I'll probably score again this year."

NOTES: Joe Pavelski, Dallas’ All-Star and leading scorer with 48 points, went pointless for a season-high fifth consecutive game. ... The Jets blocked 23 shots. Five were stopped by Dylan DeMelo, who played his 100th career game for Winnipeg. … The Stars played without checking line center Radek Faksa, who left their previous game on Wednesday night with a lower body injury. … Kyle Connor, the Jets’ top scorer with 48 points, had an assist to give him six points in his last four games. … Roope Hintz, with an overtime assist, has points in eight of his last 10 games.

Jets: Complete a road back-to-back on Saturday night at Nashville.