Fans came from near and far to watch the Goodyear Cotton Bowl Classic, and COVID-19 was top of mind for many.

ARLINGTON, Texas (AP) - Desmond Ridder didn't want to take on the burden of representing all the non-Power Five schools in the CFP semifinal Cotton Bowl against top-ranked Alabama.

The breakthrough Bearcats held up pretty well despite Ridder's offense going nowhere for long stretches Friday while the Alabama running game overwhelmed them in a 27-6 loss that ended an undefeated season.

Cincinnati (13-1) still had a chance when Bryan Cook intercepted Heisman Trophy winner Bryce Young's pass near midfield with Alabama leading by 11 late in the third quarter.

Ridder and the Bearcats went backward from there, and the Crimson Tide (13-1) extended the lead to 24-6 on the next possession after avoiding a three-and-out by converting on third-and-16.

The Bearcats (No. 4 in The Associated Press and CFP rankings) were held without a touchdown for the first time since a 42-0 loss to Ohio State in the second game of 2019. That also was the last time they played a top-five opponent.

The numbers didn't favor the first non-Power Five school in the playoff coming in, and didn't look much better afterward against a powerhouse program headed to the championship for the sixth time in the eight years of the four-team playoff format. 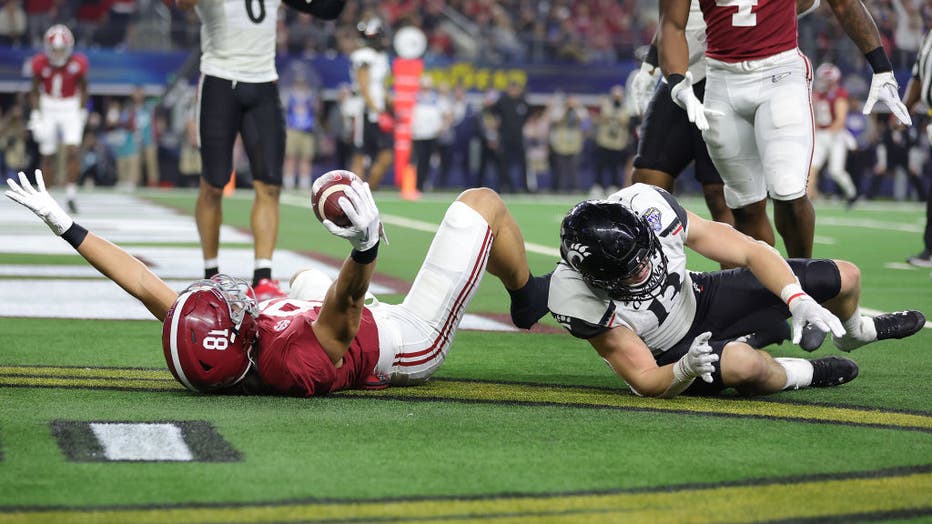 ARLINGTON, TEXAS - DECEMBER 31: Cameron Latu #81 of the Alabama Crimson Tide celebrates after scoring a touchdown against the Cincinnati Bearcats during the fourth quarter in the Goodyear Cotton Bowl Classic for the College Football Playoff semifinal

Cincinnati averaged 2.8 yards per play while falling behind 17-3 at halftime. Alabama had 302 yards at halftime when the Bearcats came in allowing 305 per game.

Fifth-year Alabama senior Brian Robinson Jr. had his first career 200-yard game, finishing with 204 yards as the Crimson Tide had a season-high 301 yards on the ground.

Cincinnati's best chance to get in the end zone came on its first possession, when Alec Pierce was open at the goal line on a first-down pass from the Alabama 9 but linebacker Henry To'oTo'o knocked it down at the line of scrimmage.

The Bearcats settled for the first of two field goals -- their only scoring -- before three consecutive three-and-outs. The second drive to a field goal started the second half, and the next good scoring chance stalled inside the Alabama 25 when Ridder was sacked on fourth down.

With the game out of reach late in the fourth quarter, the Bearcats failed again on fourth down. Ridder's pass was incomplete as he finished 17 of 32 for 144 yards for his first sub-100 rating of the season (90.9).