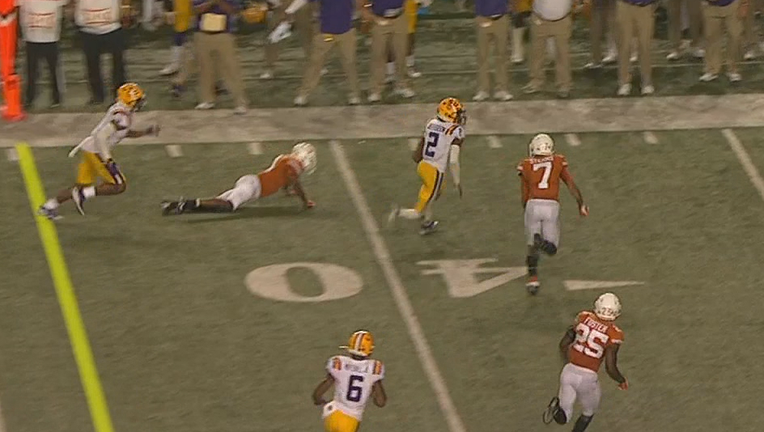 AUSTIN, Texas - After losing a tough game to LSU with its secondary taking a beating in the process, Texas needs a rebound win before heading into the Big 12 schedule.

If ever there was a program to be teed up for Texas (1-1), it's the small private school in Houston.

The Owls are among the No. 12 Longhorns' oldest rivals — 94 meetings since 1914 — but any real sense of competition between the programs vanished long ago. President John F. Kennedy joked about it in 1962 and nothing has changed since. Texas is 41-1 in the series since 1966 and the games are rarely close.

Even after all these years, second-year Rice coach Mike Bloomgren is willing to channel Kennedy's message from a speech about the challenge of the lunar space program..

"I think we all know it, but why does Rice play Texas? Why do we choose to go to the moon? Not because they are easy but because they are hard," Bloomgren said this week. "That's going to be the challenge that we accept and we embrace as a football team."

Rice (0-2) ranks near the bottom nationally on offense and is averaging just 14 points. On Saturday night, the Owls will face a Texas defense hungry to play after surrendering 471 yards passing and huge plays for touchdowns.

"Do we need to improve? Yeah. Are we bad? No we're not at all," said Texas sophomore Caden Sterns, who was alone in coverage on LSU's Justin Jefferson on the

Rice is familiar ground for Texas coach Tom Herman, who made a name for himself as the Owls' offensive coordinator in 2007-2008. That included a 10-3 finish in 2008 with a bowl win behind one of the top offenses in the country. But even that season included a 52-10 drubbing by Texas. Herman's stint at Rice also included introductions with then-Rice athletic director Chris Del Conte. Those two were joined together again in Austin in late 2017 when Del Conte was named athletic director at Texas.

Rice starter Wiley Green was knocked out of last week's loss to Wake Forest and briefly hospitalized after a first quarter injury. Harvard graduate transfer Tom Stewart came on and passed for 185 yards and a touchdown.

"(Green) has been evaluated by our doctors and all imaging and testing has come back negative," Bloomgren said. "Obviously, a lot of prayers were answered on that one. Besides the soreness in his neck, he's doing much better."

For the third straight week, Texas will be watching tailback Keaontay Ingram. Only this time, it's to see if he can bounce back from a poor game. Ingram dropped a touchdown in the end zone and had a fumble against LSU. By the end of the game, he'd been out-rushed by backup Roschon Johnson, a converted quarterback who just two weeks ago was Texas' "emergency" running back.

Texas senior slot receiver Devin Duvernay had a breakout game against LSU with 12 catches for 154 yards and two touchdowns. His made tough catches, broke tackles and turned short gains into long ones.

"The anger that he runs with when he has the ball in his hands and his physicality is just so impressive for a slot receiver," Herman said.

Texas has four sacks in two games but none from the down linemen. The lack of push at the line of scrimmage has Texas blitzing linebackers and defensive backs to create quarterback pressure. That got exposed when LSU beat the blitz for the game-clinching score. Herman said he's not concerned.

"They were very disruptive" against LSU," he said. "Stats don't matter for defensive linemen. Do you disrupt the offense, and if the answer is yes, you're doing your job."

Wide receiver Jake Smith caught his first touchdown pass against LSU and could be ready for an expanded role in the Texas offense. He's also the No. 1 punt returner but has only one return for two yards in two games.