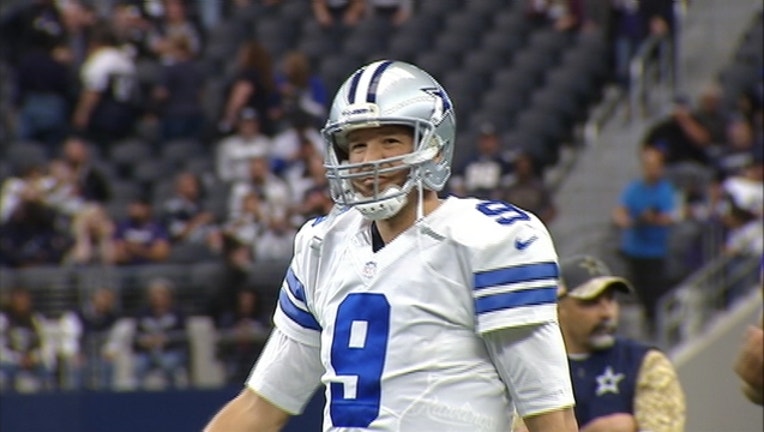 The Dallas Mavericks are planning a tribute and "very special sports experience" for the retiring Cowboys quarterback before their final home game.

Two people with knowledge of the plan told The Associated Press that Romo would be in uniform wearing his familiar number - on a Mavericks jersey - while sitting on the bench. Both people spoke on condition of anonymity because details of the tribute haven't been released.

While declining to offer details, coach Rick Carlisle said in a text message Saturday that he and owner Mark Cuban "very much look forward to honoring one of Dallas' all-time best athletes and people with a very special sports experience."

Dallas is currently carrying 14 players, and the maximum is 15, leaving room for the honorary player.

A frequent front-row fan with a seat next to the Mavericks bench during his 10 years as the Cowboys starter, Romo lost his job to rookie Dak Prescott while recovering from a back injury last season. The four-time Pro Bowl player is headed to CBS as the lead NFL analyst rather than trying to play elsewhere.

Already eliminated from the playoffs with their first losing record in the 17 full seasons that Cuban has owned them, the Mavericks play Denver in their home finale Tuesday night.

"I can't get into specifics at this time, but encourage fans to be in their seats when warmups begin at 7:15 p.m.," Carlisle said.

Romo, who turns 37 this month, was a standout basketball player in high school in Wisconsin before playing football at Eastern Illinois.

Undrafted out of the lower-division school in 2003, Romo rose to stardom after taking over as the Cowboys starter in the middle of the 2006 season. He became the storied franchise's career leader in passing yards and touchdowns but couldn't match the postseason success of multiple Super Bowl winners Roger Staubach and Troy Aikman.

Prescott had already shown promise when Romo broke a bone in his back in a preseason game at Seattle last year. It was the fourth back injury since 2013 for Romo, who missed most of 2010 and 2015 with broken collarbones.

The Cowboys had a franchise-record 11-game winning streak on their way to the NFC East title without Romo, who conceded the job to Prescott when he was healthy and was the backup for the last seven games of the regular season and a divisional playoff loss to Green Bay.

Romo was released Tuesday, the same day as the announcement of his deal with CBS to replace another former quarterback in Phil Simms on the No. 1 broadcast team with Emmy Award-winning play-by-play man Jim Nantz.

Earlier in his career, Romo also made headlines on the golf course. He tried to qualify for the U.S. Open three straight years from 2010-12 and reached the second stage of qualifying the first of those three tries. He stopped playing after back surgery during the offseason in 2013.