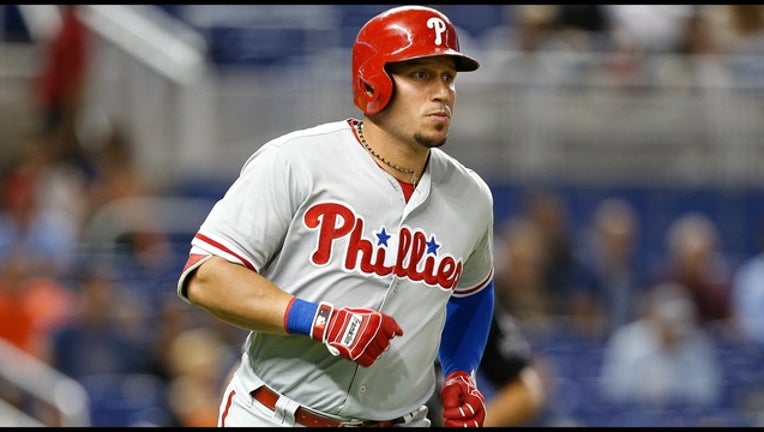 Asdrubal Cabrera #13 of the Philadelphia Phillies rounds the bases after hitting a solo home run in the second inning against the Miami Marlins at Marlins Park on September 3, 2018 in Miami, Florida. (Photo by Michael Reaves/Getty Images)

DALLAS (AP) - The Texas Rangers have found a veteran to play third base after the retirement of Adrian Beltre.

Free agent Asdrubal Cabrera has agreed to a $3.5 million, one-year contract with the Rangers, according to a person familiar with the deal. That person spoke to The Associated Press on condition of anonymity Tuesday because the deal was pending a successful physical for the 33-year-old infielder.

Cabrera split last season, his 12th in the majors, with the New York Mets and the Philadelphia Phillies.

After playing 90 games at second base for the Mets, Cabrera was traded July 27 to Philadelphia, where he also played shortstop and third base. In 147 games overall, he hit .262 with 23 homers and 75 RBIs, his most since 2011 when he had career highs of 25 homers and 92 RBIs in the first of his two consecutive All-Star seasons as Cleveland's shortstop.

Beltre announced his retirement in November with 3,166 hits in 21 big league seasons, the last eight with the Rangers.

Texas acquired young third baseman Patrick Wisdom in a trade from the St. Louis Cardinals during the winter meetings, but then traded infielder Jurickson Profar to the Oakland A's a couple of weeks later. Wisdom made his major league debut with 32 games last season.

General manager Jon Daniels said during the team's winter minicamp Tuesday that he expected to add externally at third base.

"Ideally we'd like to add somebody to come in and play third base, but also provide some versatility around the infield," Daniels said.

Wisdom and Kiner-Falefa both took part in the minicamp. Wisdom fielded some grounders at third base, but the team views Kiner-Falefa as primarily a catcher after he also started 35 games behind the plate last season. Slugger Joey Gallo came up through the minor leagues as primarily a third baseman, but made the transition last year to full-time outfielder and Texas plans to keep him there.