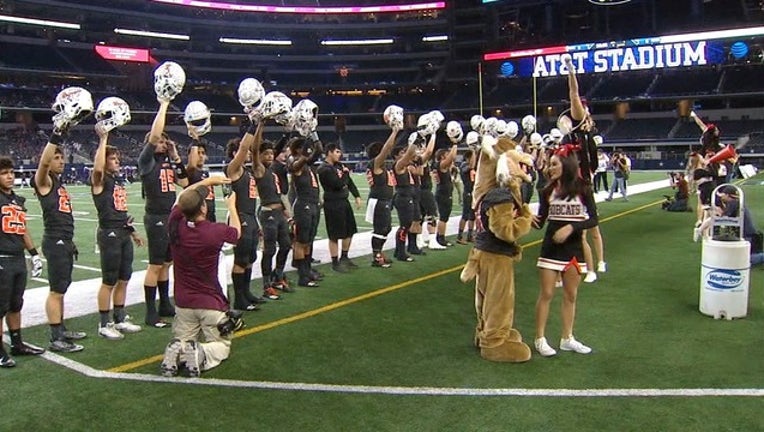 It's been a tough year for students and families of kids at Refugio High School.

Many of the kids remain homeless after Hurricane Harvey ravaged their town. But now, they have something to celebrate.

The Refugio Bobcats football team competed Wednesday night for the 2A Division I state title at AT&T Stadium in Arlington.

The Bobcats ran onto the field with pride. You'd never know by the way they carry themselves that half of this team has damage to their homes from Hurricane Harvey.

"I would say virtually every building, every home, every business in our town has sustained some sort of damage,” said Superintendent Melissa Gonzales.

The town of 3,000 people is just two hours south of Houston. After the hurricane hit, they didn't have drinking water or power for weeks. About 13% of students in the school district remain homeless.

"It's pretty hard to focus on more than one thing at a time, like where you're going to live and school work and then practice,” said Casey Henderson, the team quarterback.

Henderson's home was destroyed after the hurricane. On top of that, he fractured two vertebrae during a game two weeks later. Doctors weren't sure he'd walk again. But, he is.

"It's just a lot of determination it takes,” he said.

If there's any Texas school that exemplifies determination this year, it's Refugio.

Henderson's head coach led a fundraiser to hire a contractor to rebuild his family's home. He now has a new house. But Refugio is still rebuilding.

"You have to fight through everything,” the quarterback said. “You can't just give up because your house is destroyed or somebody gets hurt. My team has been through a lot, and you see where they are right now."