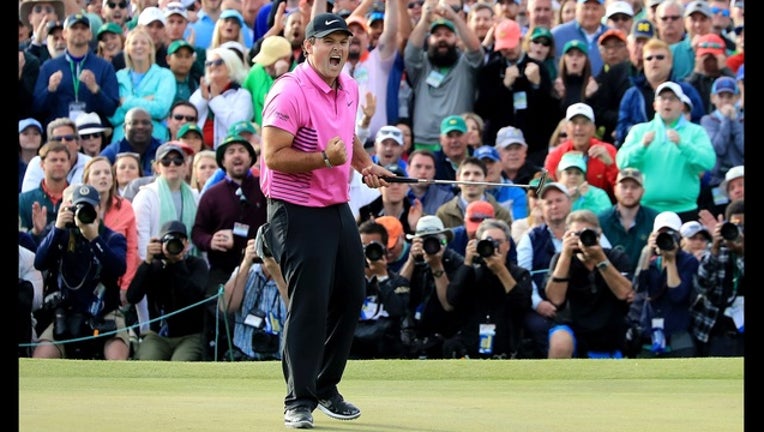 Patrick Reed of the United States celebrates after making par 18th green during the final round to win the 2018 Masters Tournament at Augusta National Golf Club on April 8, 2018 in Augusta, Georgia. (Photo by David Cannon/Getty Images)

AUGUSTA, Ga. (AP) - The tepid applause that greeted Patrick Reed on the first tee made it clear he wasn't the people's choice.

All he cared about was being the Masters champion.

He turned back an early move by Rory McIlroy and a late charge by Rickie Fowler. Most daunting in the middle of the final round Sunday was a familiar name at Augusta National - Jordan Spieth - on the verge of the greatest comeback in Masters history.

Reed had the game and the grit to beat them all. And when he slipped on that green jacket, he had everyone's respect.

"I knew it was going to be a dogfight," Reed said. "It's just a way of God basically saying, 'Let's see if you have it.' Everyone knows you have it physically with the talent. But do you have it mentally? Can you handle the ups and downs throughout the round?"

He has proven that playing for his country. He did it Sunday for himself.

The final test was a 25-foot putt down the scary slope on the 18th green, and Reed pressed down both hands, begging it to stop as it rolled 3 feet by. From there, the 27-year-old Texan calmly rolled in the par putt for a 1-under 71 and a one-shot victory.

Known as "Captain America" for his play in the Ryder Cup, Reed added a far more important title: Masters champion.

The loudest cheers were for everyone else, and Reed picked up on that right away. The crowd was squarely behind McIlroy and his best chance yet at completing the career Grand Slam. Then it was Spieth, running off four birdies in a five-hole stretch on the back nine to challenge the course record. The loudest cheer was for Fowler when he made an 8-foot birdie putt on the final hole to pull within one.

Reed never flinched through it all.

"I just went out there and just tried to play golf the best I could and tried to stay in the moment and not worry about everything else," Reed said.

Reed, who finished at 15-under 273, won for the sixth time in his PGA Tour career.

Until Sunday, he was best known for the trophies he shared at the Ryder Cup and Presidents Cup. He is ferocious in match play, especially the team variety, and his singles victory over McIlroy at Hazeltine in the 2016 Ryder Cup led to his nickname.

"He's not scared. I think you guys have seen that previous from the Ryder Cups and the way he plays," said Fowler, who closed with a 67. "He won't back down. I don't necessarily see him as someone that backs up and will let you come back into the tournament. You have to go catch him."

Fowler did his best with three birdies in a four-hole stretch, and the 8-footer on the final hole. It still wasn't enough. Fowler was runner-up for the third time in a major. He left the scoring cabin when Reed tapped in for par.

"Glad I at least made the last one, make him earn it," Fowler said with a grin as he waited to greet the newest major champion.

"You had to do it didn't you?" Reed told him as they exchanged a hug. "You had to birdie the last."

Spieth put up the most unlikely fight and was on the verge of the greatest comeback in Masters history. He started nine shots behind going into the final round, and was inches away on two shots from a chance at another green jacket.

His tee shot on the 18th clipped the last branch in his way, dropping his ball some 267 yards from the green. His 8-foot par putt for a record-tying 63 narrowly missed on the right. He had to settle for a 64.

"I think I've proven to myself and to others that you never give up," Spieth said. "I started the round nine shots back and I came out with the idea of just playing the golf course and having a lot of fun doing it and try to shoot a low round and finish the tournament strong and see what happens, if something crazy happens."

McIlroy, meanwhile, will have to wait another year for a shot at the career Grand Slam.

Trailing by three shots to start the final round, he closed to within one shot after two holes. That was as close as he came. McIlroy's putter betrayed him - he missed four putts inside 10 feet on the front nine - and he was never a factor on the back nine. He closed with a 74 and tied for fifth.

"Tough day, but I'll be back," McIlroy said. "And hopefully, I'll be better."

Reed is old-school among his generation, with a brash attitude and a willingness to speak his mind. He has never been terribly popular in this state, mainly because of allegations of bad behavior while playing for Georgia that led to an early departure from the Bulldogs. He transferred to Augusta State and led the outmanned Jaguars to a pair of NCAA titles. His parents live in Augusta, but were not at the tournament. They weren't at his wedding in 2012, a relationship Reed chooses not to discuss.

He won a big one Sunday, and it was hard work, just the way he likes it.

Different about this victory for Reed was the fuchsia shirt he wore as part of a Nike script. Reed always wears black pants and a red shirt because that's what Tiger Woods does, and Reed has long modeled his mental game after Woods. "Be stubborn," he once said about learning by watching Woods.

Woods broke par for the first time all week with a 69. He tied for 32nd, 16 shots behind, in his first major since the 2015 PGA Championship.

Reed went to the back nine with a four-shot lead over four players, and they all had their chances. That included Jon Rahm, the 23-year-old from Spain, whose chances ended when he went after the flag on the par-5 15th and came up short in the water. He shot 69 and finished fourth.

Reed made a 25-foot birdie putt on No. 12, and his biggest birdie was a 9-iron to 8 feet on the 14th that broke the tie with Spieth. He made all pars from there. That was all he needed.

He became the fourth straight Masters champion to capture his first major.

Reed once claimed after winning a World Golf Championship at Doral that he was a top 5 player in the world, which subjected him to ridicule because it was only his third career title. His first major moves him to No. 11. It also comes with a green jacket, which is worth far more notoriety, not to mention respect.