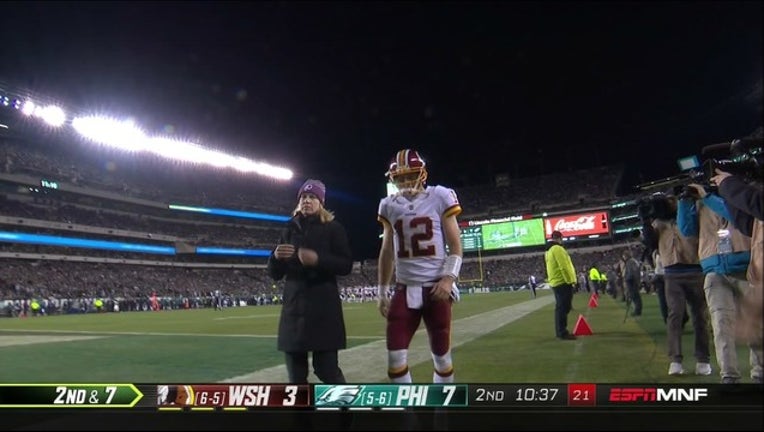 McCoy ran to avoid a sack and tried to slide as the Eagles defense rushed toward him. He planted his right leg into the turf and the lower part of the leg and ankle viciously whipped into safety Malcolm Jenkins' knee.

Gruden said McCoy will miss the rest of the season.

The Washington Redskins (6-6) know a thing or two about serious injuries to quarterbacks - McCoy got his chance because Alex Smith suffered a broken right leg just weeks ago that has threatened his career.

McCoy's injury occurred on the nasty slide and he was replaced by Mark Sanchez, who was tasked with keeping the Redskins afloat in the NFC playoff picture.

"We have to get a plan ready for Mark moving forward," Gruden said. "We've got to play great football around him which we didn't do tonight."

McCoy stayed in the game and completed two short passes before limping off with the Redskins trailing 7-3 to the Super Bowl champion Eagles (6-6). The Redskins said that McCoy would not return, but didn't immediately provide details about the injury.

McCoy took over and made his second straight start since Smith was knocked out with gruesome season-ending leg injury last month against Houston. McCoy helped Washington score a pair of TDs, including on his 9-yard touchdown on the backup QB's first pass in a regular-season game since 2015.

His start in the Thanksgiving game against Dallas was his first since 2014 and he won't get another one this year. McCoy, who started for Cleveland and San Francisco earlier in his career, had appeared in nine games over the last three-plus seasons with Washington, until Smith was injured.

Sanchez was the lone QB left on Washington's roster. He threw an interception in the fourth quarter with the Redskins trailing 22-13 that snuffed a rally.

Sanchez, signed two weeks ago, played for the first time since Jan. 1, 2017, when he was with Dallas. Sanchez, a former Eagle, was eased into the lineup.

Sanchez was once the franchise quarterback for the New York Jets and led them to the AFC championship game his first two seasons in the NFL. Sanchez was the fifth overall pick in the 2009 draft and drew comparisons to Joe Namath in New York. He was 4-2 in the postseason and helped the Jets beat Peyton Manning and Tom Brady in consecutive road playoff games in January 2011. But Sanchez had an NFL-leading 52 turnovers in 2012-13 and lost his starting job to Geno Smith. He spent two seasons with the Eagles and one with the Cowboys.

His lasting image of his time with the Jets came in 2012, when he fumbled after running into the backside of guard Brandon Moore. It was returned for a touchdown by New England's Steve Gregory in front of a national television audience on Thanksgiving night and was infamously labeled "The Butt Fumble."

Sanchez lost a fumble against the Eagles and actually saved the ball by pressing it against his rear end.

There's no guarantee Sanchez will remain the starter. The Redskins worked out E.J. Manuel, T.J. Yates, Kellen Clemens and Josh Johnson after Smith was injured and quality veteran QBs are in low supply.