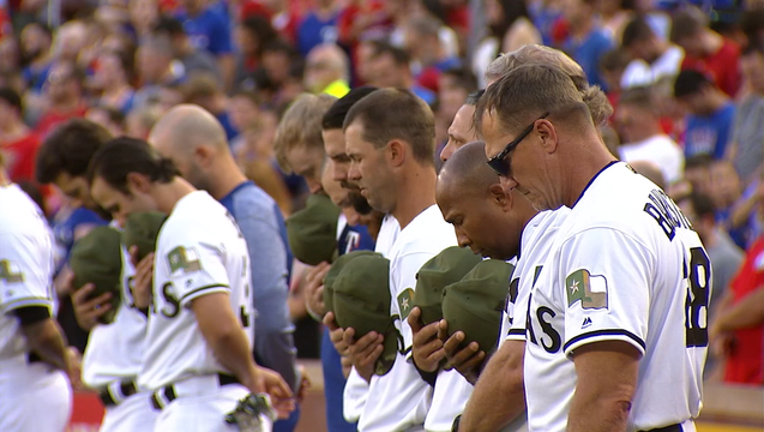 ARLINGTON, Texas (AP) - Another long game for Tampa Bay, and another win for the resilient Rays.

Tim Beckham hit a go-ahead three-run homer in the seventh when the Rays scored five runs in a span of three pitches for a 10-8 win at Texas that took nearly four hours Monday, a night after needing 15 innings and nearly 6 1/2 hours to win in Minnesota.

"Shows how much heart we have as a team and we're not going to go down easy," Beckham said. "We're going to make some noise and keep winning."

Pinch-hitter Colby Rasmus hit a two-run double on the first pitch thrown by reliever Tony Barnette (1-1), tying the game at 7-all.

"I let it snowball from there," Barnette said.

The Rangers then issued a no-pitch intentional walk to Kevin Kiermaier, who had already struck out three times, before Beckham hit a 1-0 cutter over the 14-foot wall in left-center field.

"That fired me up," Beckham said of the intentional walk. "I wanted to see a pitch I can drive and he gave it to me."

Alex Colome struck out the side in a perfect ninth for his 14th save in 16 chances.

"Really impressive, two impressive wins back-to-back days," manager Kevin Cash said. "Asked a lot of the guys and can't express how much they came through."

Adrian Beltre singled in his first at-bat this season for Texas and Joey Gallo crushed his 16th homer. Shin-Soo Choo drove in three runs, all off De Leon, with a two-run single in the sixth and a solo homer in the eighth.

The Rangers were back home after a 3-6 road trip, which came after they had swept through their previous eight-game homestand. They led 4-1 in the second after Gallo pulled a pitch 430 feet down the right-field line.

Beltre had been out all season because of calf issues, but was activated from the disabled list to debut in his 20th major league season. His single in the first was his 2,943rd career hit, tying him with Frank Robinson for 34th all-time.

"Obviously adds excitement, energy and presence," manager Jeff Banister said of Beltre's return. "You saw it immediately just with all of our guys inside the dugout and on the field."

Tampa Bay RHP Erasmo Ramirez became the first pitcher since 1984 to start a major league game the day after recording a save. Ramirez had a perfect 15th inning on 12 pitches against the Twins. He allowed four runs and six hits in 2 1/3 innings while throwing 31 of his 43 pitches for strikes in Texas.

Longoria already had a pair of RBI grounders before his homer to straightaway center off Rangers starter Martin Perez tied the game at 5-all in the fifth. ... Texas is 2-7 since their 10-game winning streak that is still the longest in the majors this season. ... Tampa Bay has won five of six and is two games over .500 for the first time since April 10.

Gallo, the primary third baseman while Beltre was out, was at first base in place of Mike Napoli (back stiffness) and had a couple of nice defensive plays. He also had a double and scored on Robinson Chirinos' single in the fourth.

Rays: RHP Brad Boxberger (right flexor strain) threw 20 pitches during live BP at the Rays' spring training complex in Florida. 2B Brad Miller (abdominal strain) was among those who hit against him, and his catcher was Wilson Ramos (rehabbing from a torn ACL).

Rangers: RHP Nick Martinez is 1-3 in five May starts.