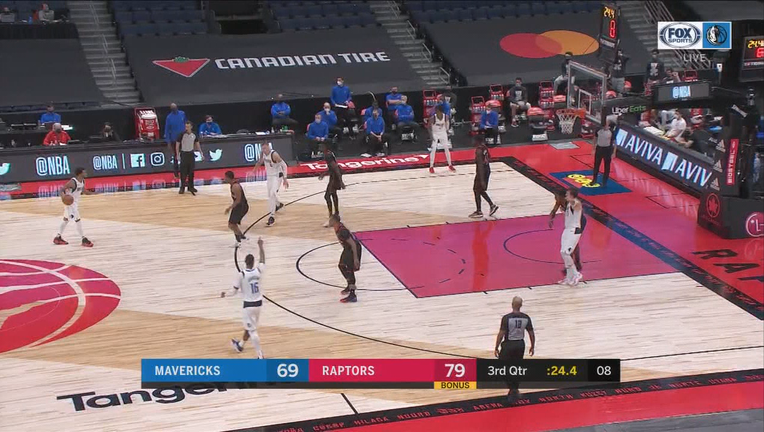 TAMPA, Fla. - Kyle Lowry flirted with a triple-double on Monday night and the Toronto Raptors shut down Dallas star Luka Doncic for a 116-93 victory.

Lowry had 23 points, nine rebounds and seven assists and Pascal Siakam scored 15 of his 19 points in the second half as the Raptors pulled away for their third straight victory. Chris Boucher added 21 points and OG Anunoby contributed 13 points, 11 rebounds and much of the defensive work against Doncic, along with Stanley Johnson.

"I think what we do best is play team defense," Johnson said. "It's pretty easy when you go out there and guard one guy with five guys."

"I thought he was frustrated," Johnson said. "When you're tearing up the league like he is and then someone does what we did, it's frustrating."

"This is a very difficult planning situation, to try to prepare defensively in this kind of situation," Carlisle said. "Come Wednesday, we'll do a better job of it."

Kristaps Porzingis led Dallas with 23 points and nine rebounds. The Mavericks shot 37.8% with 23 turnovers and lost their third straight.

The second half was all Raptors.

"It was nice to play well pretty much the entire second half," said coach Nick Nurse, who mixed up the defense of Doncic.

"We worked hard to limit his touches somewhat," Nurse said. "He didn't seem to have the ball all the time like he does in some games ... and he kicked it out a lot, which is what we wanted hm to do."

Siakam's short jumper midway through the third quarter broke a 59-all tie and launched a 16-2 run that put the Raptors up to stay.

Boucher and Norman Powell (17 points) led an early fourth-quarter rally that put the game away.

Carlisle’s ejection came with 58.4 seconds left in the first quarter, just after Powell had converted a running shot in the lane after a Dallas turnover.

Mavericks: G Josh Richardson, F Maxi Kleber, F Dorian Finney-Smith and F-C Dwight Powell, all of whom were among the team's top 10 in minutes played, remained sidelined on COVID protocol. ... G Tim Hardaway, who had missed Sunday's game with a strained left groin, played 27 scoreless minutes and shot 0 for 12. . . . Doncic joined Wilt Chamberlain, Oscar Robertson and James Harden on Sunday as the only players ever to post games of 35-15-15 or better.

Raptors: Toronto shot 10 for 16 from long range in the second half. ... C Alex Len missed a third straight game for personal reasons.

Carlisle spent part of Monday listening to speeches of Dr. Martin Luther King. "For me it’s been a daunting education about social justice over the last eight or 10 months, but it’s been so important for me and for so many others," he said. "The world has gotten to be a better place over the last 50 or 60 years, but we’re nowhere near where we need to be."

The Mavericks had a call reversed by replay just three minutes, 39 seconds into the game. Porzingis had been called for a charge. But after looking at the video, the officials charged the foul on Toronto’s Aron Baynes, determining that Baynes had been inside the half-circle when drawing the contact.

Mavericks: Visit Indiana on Wednesday night. The Mavericks won without Doncic (right ankle sprain) in their last trip to Indianapolis on Feb. 3, 2020.

Raptors: Conclude a five-game "homestand" with a two-game set against Miami on Wednesday and Friday nights.