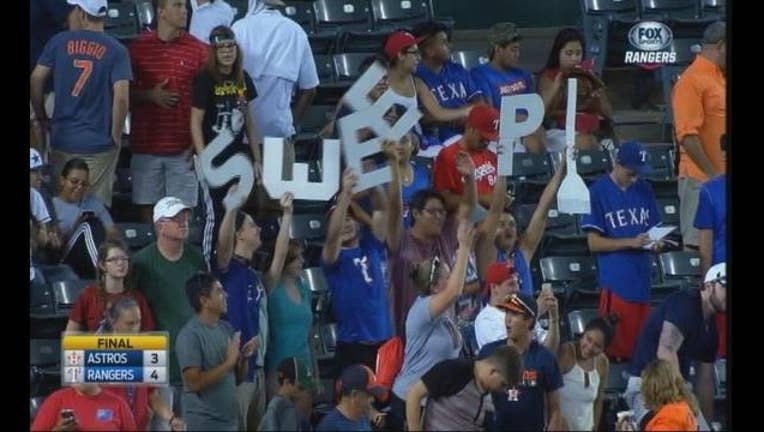 ARLINGTON, Texas (AP) — All that really matters for manager Jeff Banister and the Texas Rangers is getting the victory that finished off a three-game sweep of the AL West-leading Houston Astros.

"It wasn't pretty, typically you don't win a ballgame when you walk eight and hit one," Banister said. "That's a first for me ... a low-scoring, one-run game and win that game."

Chris Gimenez hit what proved to be a deciding home run and Texas held on for the 4-3 win Wednesday night, using five relievers after Nick Martinez allowed one hit and one run over five innings on his 25th birthday.

The homer by Gimenez leading off the second for a 4-0 lead was the only extra-base hit for the Rangers, and came after they scored three unearned runs in the first off Scott Kazmir (6-6).

The Rangers have won four in a row and seven of eight, moving within five games of the division lead, the closest they have been since June 30.

"It was a big series for us," Banister said.

All three Houston runs were scored by players who reached on a walk.

With 20-save closer Shawn Tolleson unavailable after pitching six of the previous seven games, Sam Dyson got his second career save — both since a Friday trade from Miami. He closed it out only after allowing a leadoff single in the ninth and hitting Jose Altuve with a pitch.

Martinez (7-6), walked three and struck out one while throwing 86 pitches in a game which start with the temperature at 100 degrees.

"It wasn't a clean outing for him," Banister said. "Essentially, he battled himself all night long trying to get the ball in the strike zone."

Kazmir, in his third start for Houston since a July 23 trade from Oakland, lowered his AL-best ERA from 2.10 to 2.08 since only one run against him was earned. The right-hander struck out five in his 5 2/3 innings.

He had thrown 14 2/3 scoreless innings in his first two starts for Houston, part of his five games in July while allowing one earned run over 34 innings (0.26 ERA). Earlier this season for the A's, Kazmir gave up only three runs over 21 innings in three starts against the Rangers.

Delino DeShields reached to start the Texas first when Kazmir was unable to cleanly field the roller in front of the plate for an error. Ryan Strausborger, in his first major league at-bat, had a sacrifice bunt but reached on catcher Hank Conger's throwing error. Prince Fielder had a sacrifice fly before consecutive RBI singles by Mitch Moreland and Elvis Andrus.

"It all started with me. It did. I didn't set the tone well. It was an easy play right in front of me and I just rushed it," Kazmir said. "A couple errors early on against a team like that gave 'em momentum. It's tough."

Houston was within 4-3 after five consecutive batters reached with one out in the sixth against two relievers.

Carlos Gomez had a leadoff walk in the fourth and scored on a double by Lowrie.

The seven wins in the last eight for the Rangers have all come at home, after they lost 12 of the previous 13 there.

There were a lot of defensive highlights. In the Texas fifth when Astros CF Gomez had a long running catch in the gap, 2B Altuve made a diving play to his left and 20-year-old SS Correa went into the hole toward third base and then and made a long jump-step throw for an out. An inning earlier, Texas SS Elvis Andrus made a similar play and rookie RF Strausborger had an inning-ending diving catch.

Astros: OF Preston Tucker is day to day with a bruised triceps muscle after getting hit by a pitch in Tuesday night's game.

Rangers: LHP Derek Holland, out since a shoulder strain in the April 10 home opener, says he "feels very good" after 55 pitches in his latest rehab start Tuesday night. He's expected to next start Sunday for Double-A Frisco.

Rangers: After a day off Thursday, the Rangers open a weekend series Friday at Seattle with LHP Cole Hamels making his second start for Texas since his trade from Philadelphia.