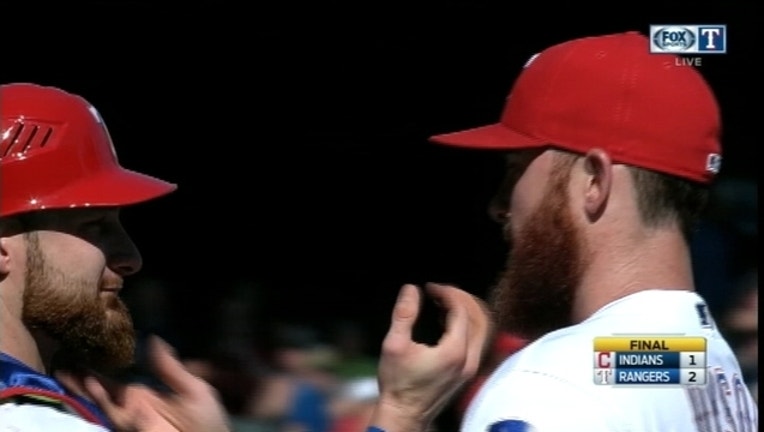 ARLINGTON, Texas (AP) — Derek Holland has been a model of consistency for the Texas Rangers since coming off the disabled list.

Even though he's only made two starts, the left-hander's performance so far is a positive sign for the American League's top team as it tries to solidify its rotation behind Cole Hamels and Yu Darvish over the final five weeks of the season.

Holland allowed a run and four hits with five strikeouts in six innings, the same as in his return five days earlier. The Rangers beat the Cleveland Indians 2-1 on Sunday, taking three of four games in a series between division leaders.

"What we always talk about is being consistent and I want to make sure I'm showing that," Holland said. "I know it's two games in a row. The way I'm going to look at that is, whoop-de-do. ... It's good to live in that moment. I've got to continue to worry about staying consistent."

Ian Desmond and Jonathan Lucroy each had an RBI single for Texas, which has an 8 1/2-game lead over Houston and Seattle after both those AL West rivals lost Sunday. New left fielder Carlos Gomez made two highlight-reel catches, including a runs-saving grab to end the sixth against the last batter Holland faced.

Holland (6-6) had missed two months because of shoulder inflammation before starting Tuesday at Cincinnati, a 3-0 loss. He threw 62 of his 84 pitches for strikes against the AL Central-leading Indians.

Cleveland loaded the bases in the ninth against closer Sam Dyson, who allowing a single and then consecutive one-out walks before striking out pinch-hitter Tyler Naquin and retiring Abraham Almonte on a fly ball to end it. It was Dyson's 29th save in 33 chances.

In the sixth, with two Indians still on base and two outs after Jason Kipnis' RBI single cut the margin to 2-1, Mike Napoli hit a hard liner to left. Gomez was sprinting back and reaching over his head when he made the catch.

"We had a few chances," Indians manager Terry Francona said. "(Napoli) hit his ball and Gomez made a nice play, but we didn't have a ton of chances."

That was an inning after Gomez made a leaping catch with his glove extended as his body crashed into the left-field wall to rob Jose Ramirez of a hit.

Gomez played his fourth game for Texas after playing in 85 earlier this season for the Houston Astros, who designated the two-time All-Star for assignment Aug. 10.

"He was the hero today," Holland said. "I may have pitched a fairly good game ... those are two big, huge catches."

Desmond's run-scoring single in the second came on the first pitch after Elvis Andrus had been initially called out on a stolen base. The Rangers challenged and Andrus, who went to second while Nomar Mazara struck out, was ruled safe on a replay review that extended the inning.

The Indians finished with six hits, and the Rangers had five. All of them were singles. It was only the third game in the 22-year history of the Rangers' ballpark that didn't include any extra-base hits. The previous one was against the Los Angeles Angels three years ago.

The Indians won 12-1 on Friday night, their only win in Texas. Cleveland scored four runs total in its other six games the past week, and was shut out twice in Texas.

Indians: Just before the deep fly Gomez caught, Ramirez fouled a pitch off his right leg, just above his knee. ... LF Brandon Guyer was hit by a pitch in the fifth inning. It was the third time in this series and MLB-high 28th time this season he was plunked.

Rangers: There was a short delay in the fourth inning when team photographer Kelly Gavin was struck on the back of the head by a foul ball hit into the photographer's well at the far end of the Rangers dugout. Gavin got the rest of the day off, and team officials said she would be OK.

Indians: Start a 10-game homestand Monday night with right-hander Trevor Bauer (9-6) on the mound against Minnesota, which has the AL's worst record.

Rangers: Darvish (4-3, 2.91) makes his third major league start against fellow Japanese pitcher Hisashi Iwakuma in the opener of a three-game series against Seattle on Monday night. Darvish and Iwakuma both came to the majors before the 2012 season. They have split their first two MLB matchups, with each winning at home.