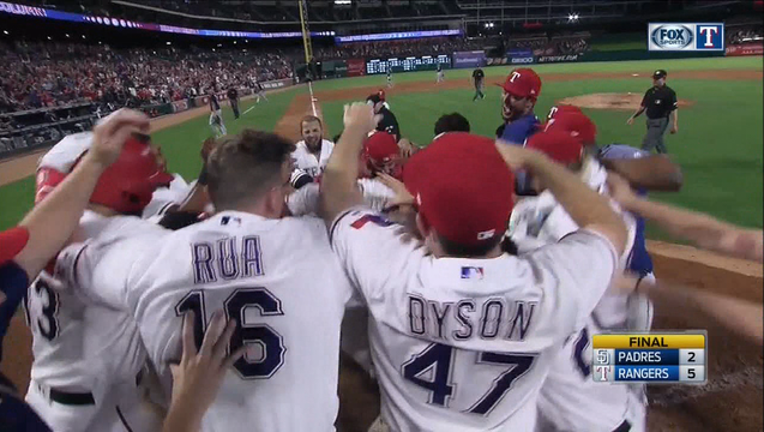 The Texas Rangers put themselves in some impressive company with their 10-game winning streak - but if the season ended now, they wouldn't make the playoffs.

The Rangers still face their share of challenges, especially since they're in the AL West, where Houston has baseball's best record and a 5 ½-game lead. Texas won 10 in a row before Saturday's loss at Detroit, but all that run did was help erase a poor start to the season.

It was the eighth time since the start of 2015 that a major league team won at least 10 in a row within the same season. Seven different teams have accomplished it, with Toronto pulling it off twice in 2015.

The six teams that did it besides the Rangers all went on to make the postseason. Right now, Texas is 1 ½ games behind the American League's second wild card. The Rangers rank toward the bottom of the AL in batting average (.237) and on-base percentage (.316), yet they're fourth in runs (215). Players such as Joey Gallo (.184 average with 13 home runs) and Mike Napoli (.188 with 10 homers) have come to typify the way their offense has worked in 2017.

Texas has been without Adrian Beltre, who has been sidelined all season with calf issues. Gallo has given the Rangers plenty of power anyway at third base, but when Beltre returns, it will be interesting to see how Texas works out its roster. Manager Jeff Banister doesn't want players to start worrying about how roles might change when others return.

"The daily routine and grind takes precedent over thinking about that," Banister said. "If you think about that, you'll make the decision very easy. These guys, they've been professional about all of it. They go out and play."

Here are a few other developments from around baseball:

Boston's Chris Sale has 95 strikeouts in 65 2/3 innings. If he keeps up that pace and throws 225 innings (he threw 226 2/3 last year) then the left-hander would be projected to strike out 326 batters this season.

If the Chicago Cubs were in another division, their unspectacular start might be cause for more concern, but even at 22-20, they're only two games behind first-place Milwaukee in the NL Central. The Cubs beat the Brewers 13-6 on Sunday.

They have looked surprisingly ordinary offensively, with only Kris Bryant really distinguishing himself with the bat, but even great teams can underachieve for extended stretches. Last year, Chicago lost 15 of 20 shortly before the All-Star break, and everything turned out fine.

The Oakland Athletics might as well have been taking batting practice in the fifth inning against Boston on Saturday, when Mark Canha, Khris Davis and Chad Pinder each hit mammoth home runs. The drives went 453, 429 and 460 feet, according to Statcast.

LINE OF THE WEEK

Avisail Garcia, White Sox, homered twice and drove in six runs in a 16-1 victory over Seattle on Saturday night.