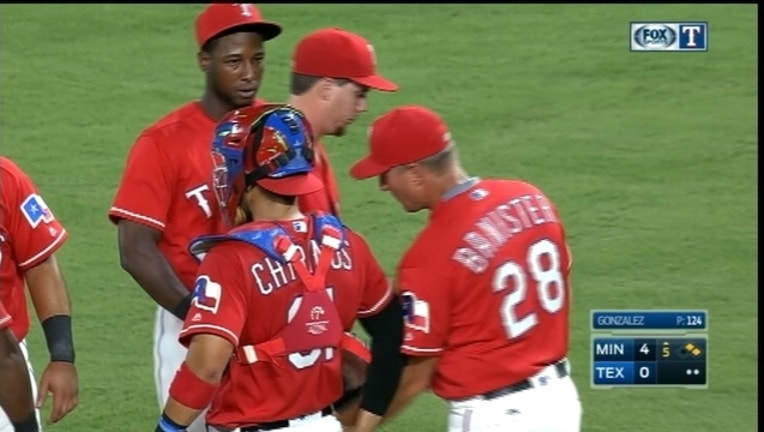 ARLINGTON, Texas (AP) — Chi Chi Gonzalez had the longest outing by a Texas starter in six games, and still didn't make it out of the fifth inning while throwing 124 pitches as the Rangers set an undesired club record.

For the first time in team history, Texas has gone six consecutive games without its starting pitcher finishing at least five innings.

Gonzalez (0-2) was pulled after 4 2/3 innings in a 10-1 loss to the Twins on Thursday night, which came after the young right-hander recorded only two outs at Minnesota last Saturday to start the streak.

"Bottom line, we've got to be better," manager Jeff Banister said. "We've been really good in some stretches, we talk about, it all starts with starting pitching. ... We can't continue to cover four or five innings in the bullpen every single night."

Even after their seventh loss in nine games, the Rangers (53-34) still have the American League's best record and a 6 1/2-game lead over Houston in the AL West.

Texas has lost three consecutive games to the Twins (30-55), who have the AL's worst record. Before losing two of three at Boston, the Rangers lost at Minnesota last Saturday and Sunday.

The first two Minnesota batters in the game had hits and scored, putting the Twins up to stay. Kurt Suzuki led off the second with his fifth homer, and it was 4-0 after Brian Dozier snapped an 0-for-13 slide with an RBI single.

"I was just grinding, from pitch one to the last pitch," Gonzalez said. "It was a grind all game."

Eduardo Nunez led off the game with a double before a single by Joe Mauer. Nunez eventually scored on a Max Kepler's sacrifice fly — a popup to shallow center field caught by lunging shortstop Elvis Andrus.

"Struggled throwing pitches," Banister said of Gonzalez. "When he did get it in the strike zone, it was elevated. Clubs like this, when you work from behind, they make you pay."

Texas failed to take advantage in the first when Tyler Duffey (5-6) walked All-Star outfielder Ian Desmond with one out and hit Adrian Beltre and Prince Fielder with pitches to load the bases. Jurickson Profar then grounded into an inning-ending double play.

The Rangers left six runners on base in the first three innings, but Duffey then retired the last nine batters he faced after Andrus had a leadoff single in the fourth.

Texas didn't score until the ninth, when Rougned Odor had a one-out triple and scored on a single by Andrus.

Outfielder Jared Hoying pitched the ninth for Texas, giving up solo homer to pinch-hitter Kennys Vargas. It was the first professional appearance on the mound for Hoying, who said he pitched only two or three times in high school.

It was the second Rangers position player to pitch in a week. Catcher Bryan Holaday threw last Saturday in Minnesota.

The Rangers failed to homer for the first time in 18 games. Their 17 in a row was the second-longest homer streak in the majors this season, and the fourth-best stretch in team history. ... Every Minnesota starter had a hit.

Rangers: Yu Darvish threw a 32-pitch bullpen session. The Rangers will see how he feels Friday before determining if the right-hander will make his next rehab start Saturday or Sunday for Double-A Frisco. ... 1B Mitch Moreland was out of the starting lineup for the fifth consecutive day because of a mild strain in his right calf. He is expected to play Friday.

Twins: RHP Kyle Gibson (2-5) goes for third consecutive victory. He has gone at least six innings in each of his last four starts, including last Sunday at home to beat Texas.

Rangers: All-Star LHP Cole Hamels (9-2, 2.93 ERA) makes his second consecutive start against the Twins, who had five runs and 10 hits off him in four innings Sunday at Minnesota — his shortest start since being acquired by the Rangers last July. He still has a chance to become the first Texas pitcher in four seasons to get 10 wins by the All-Star break.