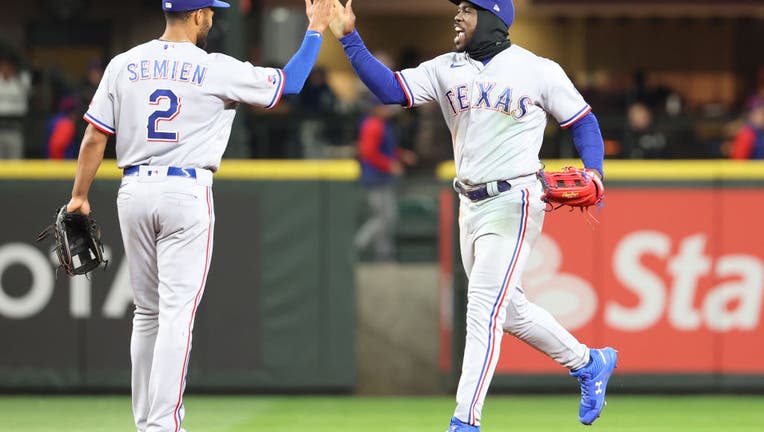 SEATTLE, WASHINGTON - APRIL 21: Marcus Semien #2 and Adolis Garcia #53 of the Texas Rangers celebrate after the 8-6 win against the Seattle Mariners at T-Mobile Park on April 21, 2022 in Seattle, Washington. (Photo by Abbie Parr/Getty Images)

SEATTLE - Kole Calhoun lined a two-out RBI double to score Adolis García in ninth, García made a terrific diving catch in the bottom of the inning and the Texas Rangers rallied from an early five-run deficit to beat the Seattle Mariners 8-6 Thursday night.

Texas snapped a five-game losing streak and avoided being swept by the Mariners by taking advantage of some sloppy defense by Seattle and getting Calhoun’s key hit.

"We’ve got good veteran leadership in here. We’ve got talented young guys. We got guys that are hungry to go out there and play and prove who they are in the big leagues," Calhoun said. "So it’s a fun group to be around. I know we’re not off to the best start, but it’s wins like that that you can build off and teach a team a lot about who they are."

García walked with two outs in the ninth against Seattle’s Drew Steckenrider. Calhoun followed by a lining a 2-2 pitch down the right-field line, and García scored from first without a throw.

Nathanial Lowe followed with an RBI single off Steckenrider (0-1) for a two-run lead.

Joe Barlow (1-0) earned the victory by striking out Tom Murphy with the bases loaded to end the eighth inning and pitched a perfect ninth.

García helped him close it out from center field by sprinting back and to his right and extending fully for Julio Rodríguez's line drive for the second out.

García said he looks forward to chances for highlight plays like that.

Seattle scored five times in the first inning against Texas starter Taylor Hearn on the strength of home runs by Ty France and J.P. Crawford. But the Mariners did nothing else offensively until the eighth inning when Eugenio Suárez lined a two-out RBI single off Matt Bush to score Adam Frazier with the tying run.

The Mariners were shaky defensively with three errors, including two by shortstop J.P. Crawford in the fifth inning that helped lead to four unearned runs.

"That’s all on me. If I make those two plays, we’re out of there," Crawford said.

Crawford’s second error allowed Mitch Garver to reach with two outs. García doubled off Seattle starter Marco Gonzales to pull the Rangers within 5-4 and Nick Solak hit the first pitch from Gonzales into the left-field bullpens for a two-run homer to give Texas a 6-5 lead.

It was the second time in his career Crawford had two errors in a game.

"We should have won today. That game is on me," Crawford said.

Gonzales pitched 4 2/3 innings and gave up six hits, but only two of the six runs were earned. He also struck out six, but it was his second outing this season that spiraled after a defensive mistake.

"In those times I take pride in being able to move forward and get us back in the dugout and unfortunately I wasn’t able to do that," Gonzales said. "So I put that on myself to be able to continue to make pitches and unfortunately I couldn’t make that happen."

Rangers: Texas will be without RHP Jon Gray for at least one start after he sprained his left knee. Gray was injured during his start Tuesday night against Seattle. Gray said the injury happened on the first pitch of the game when he stepped off the mound reacting to a fake bunt attempt. He finished five innings against the Mariners.

Mariners: Seattle got a bit of good news on as no other players or members of the coaching staff tested positive for COVID-19 on Thursday after several days of players and staff afflicted by the virus. Manager Scott Servais continued to take part in meetings and game planning virtually, acting manager Kristopher Negrón said.

Rangers: RHP Glenn Otto (0-0, 0.00) is expected to be brought up from Triple-A Round Rock to start Friday night against Oakland in the opener of a three-game series. Otto made his major league debut last season with the Rangers, going 0-3 with a 9.26 ERA in six starts.

Mariners: RHP Chris Flexen (0-2, 5.23) starts as Seattle opens a series against Kansas city. Flexen allowed three runs in six innings but took the loss in his last start against Houston.