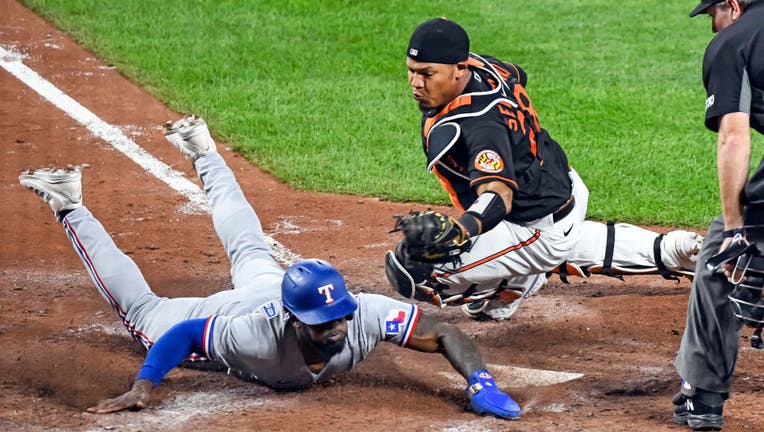 BALTIMORE (AP) - Adolis García hit a go-ahead two-run double in a five-run ninth inning and the Texas Rangers snapped a five-game losing streak with 8-5 victory over the Baltimore Orioles on Friday night.

"It's always good to end with a win like that," Garcia said through an interpreter. "It helps build some momentum and to finish the season strong. Moving forward, it's very good for the confidence and building of our team."

Baltimore centerfielder Cedric Mullins became the first player in Orioles history to hit 30 home runs and steal 30 bases in a season and received a curtain call after he hit a three-run shot in the second — his first homer since Sept. 11.

Mullins, who stole his 30th base last week in Boston, received another standing ovation as ran out to center field at the top of the inning while the rest of his teammates stood in the dugout to let him enjoy the moment.

"The trip around the bases, the curtain call immediately after, going out on the field, the guys letting me have that moment, just trying to take a breather on the situation, it was awesome," Mullins said.

Orioles rookie reliever Tyler Wells pitched the ninth and allowed a leadoff triple to DJ Peters before leaving with an undisclosed injury. Connor Greene (1-3) entered and allowed a sacrifice fly to Willie Calhoun that cut the lead to 5-4.

Greene then allowed two infield singles and a walk to load the bases before Garcia doubled. Nick Solak drove another run on a fielder's choice off Eric Hanhold and the Rangers rounded out the scoring on a double steal that allowed Garcia to score.

Josh Sborz (4-3) picked up the win and Joe Barlow earned his eighth save.

Nathaniel Lowe hit a two-run shot in the first for the Rangers, who improved to 56-99 but are still likely headed for their first 100-loss season since 1973. This would be only the third time the Rangers reached triple-digit defeats since the franchise moved from Washington in 1972.

Rangers center fielder Leody Taveras made a leaping catch over the wall to rob Pedro Severino of a two-run homer in the third. The left fielder Peters did the same to Pat Valaika in the fourth.

"This is a really good ballpark for stealing home runs, " Rangers manager Chris Woodward said. "I've seen it over the years. A lot of people had a lot of opportunities. I thought Taveras looked like Devon White back in the day, robbing a home run in that same area. He just made it look effortless. And DJ can jump really high. Those were two huge plays."

Lowe gave the Rangers an early lead with a two-run shot in the first off Orioles rookie Alexander Wells.

The Orioles took a 4-2 in the second on a fielder’s choice by Richie Martin, who beat a relay throw to first base, and a three-run homer by Mullins off Spencer Howard.

Peters pulled the Rangers to 4-3 with a single in the fourth.

Ryan McKenna had an RBI single in the ninth for the Orioles, who fell to an AL-worst 49-105.

Orioles: LHP Keegan Akin was placed on the 10-day Injured List (left adductor strain) and will undergo a surgical procedure. … OF Anthony Santander is still dealing with a sore left hamstring and was held out of the lineup.

Orioles: RHP Chris Ellis (1-0, 2.39 ERA) missed his last scheduled start because of arm fatigue, but had a solid bullpen session and is okay to pitch.