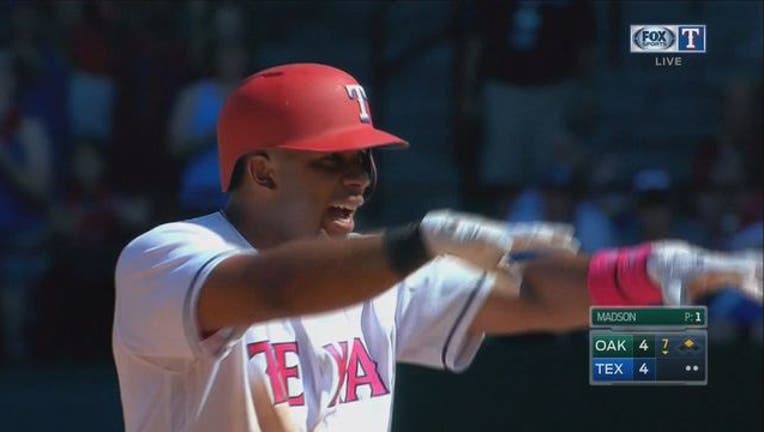 ARLINGTON, Texas (AP) - Nomar Mazara had the go-ahead hit for the second game in a row and the Texas Rangers extended their winning streak to a majors-best six in a row with a 6-4 win over Oakland on Sunday.

Mazara hit a tiebreaking RBI single with two outs in the seventh right after Elvis Andrus' RBI double, both off reliever Ryan Madson (0-3).

Carlos Gomez had three hits, including a single to start the seventh, but left the game with a right hamstring strain after scoring from second base on Delino DeShields' two-out infield single that chased Oakland starter Kendall Graveman.

DeShields hit a slicing chopper that third baseman Trevor Plouffe fielded near the line with Gomez running in front of him. The speedy DeShields beat the throw to first, and Gomez kept running and scored when appearing to lunge toward the plate with a bat also still in the way.

Dario Alvarez (2-0) got the final outs of the seventh for the Rangers. Sam Dyson pitched the eighth before Matt Bush worked the ninth for his fourth save in five chances.