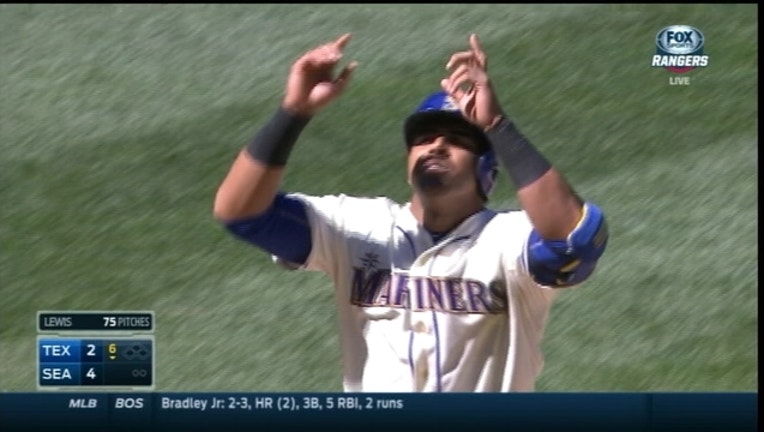 SEATTLE (AP) — The Texas Rangers felt they had a solid plan for Sunday's game against Seattle ace Felix Hernandez.

It got away from them after a promising start.

Prince Fielder and Rougned Odor had two hits apiece, but Hernandez pitched seven solid innings to lead the Mariners to a 4-2 victory.

Hernandez, who is tied for the major league lead with 14 wins, said he knew Seattle's bullpen was overworked entering the game. He also knew the Rangers' plan was to go deep into counts, taking pitches or fouling off.

"Early, we had him where we wanted him with his pitch count," Rangers manager Jeff Banister said. "In the middle innings, it got away from us a bit. But we also know he's going to get stronger as the games goes on.

"He is as good as they come in baseball so when you get him, you have to get him early and we didn't."

"I was able to keep us close but Felix did his job and it is what it is," said Lewis, who has thrown three of his eight career complete games at Safeco Field.

Cruz is batting .422 with 11 home runs, six doubles and 15 RBIs during his hit streak. He is tied with Angels star Mike Trout for the major league home run lead.

"I don't know where we'd be without him," Mariners manager Lloyd McClendon said. "He's hitting .370 with runners in scoring position. It's unbelievable what he's accomplished this year. It's almost jaw-dropping when you see his numbers, his slugging percentage. His OPS is off the charts (.998)."

Montero's second homer gave Seattle a 3-2 lead in the fourth. Cruz led off the sixth with a drive to left.

Banister was ejected by home plate umpire Lance Barrett in the eighth for arguing from the dugout.

"It is a situation where I really don't want or need for any of our guys to be ejected so I stepped in," Banister said. "If anyone was going to be thrown out, it was going to be me."

Mariners: LHP James Paxton, on the disabled list since May 29 with a strained left middle finger, threw 25 pitches in a bullpen session. There is no timetable for his next step. ... OF Franklin Gutierrez missed his second game with flu-like symptoms.

Rangers: The team is expected to recall RHP Keone Kela from Double-A Frisco on Tuesday. He was sent down for the required 10 days as a "breather" in his first big league season.

Rangers LHP Jake Diekman, who came over from Philadelphia in the Cole Hamels deal, touched 100 mph on the radar gun while pitching two scoreless innings on Saturday.

Banister said that was the first time he has seen that from one of his pitchers, "but here's what's more dynamic for Diekman, that he went from 100 to 89. You get that separation. (As a batter) you have to pick one or the other. . You're looking for the local and he throws the express, goodnight. It is the combination of pitches rather than the one pitch."