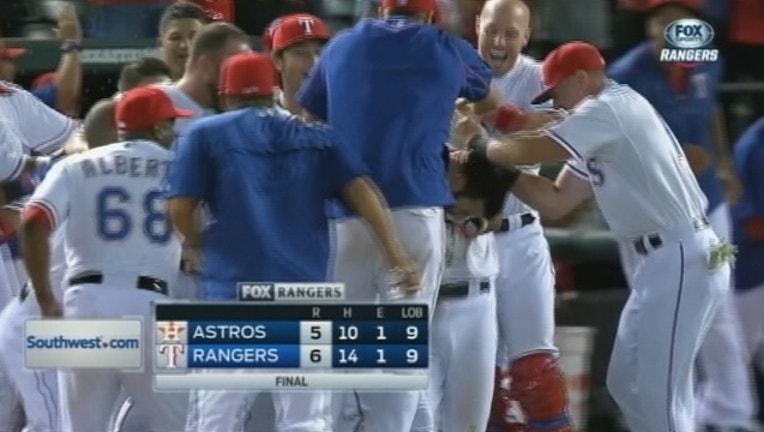 ARLINGTON, Texas (AP) — For the only time in a 31-day stretch to the end of the regular season, the AL West-leading Texas Rangers didn't have a game scheduled Monday.

"Not an exhale moment, but a mental break," first year-manager Jeff Banister said, quickly characterizing it as a travel day instead of day off.

The Rangers still have 13 games left in a pennant chase that seemed so unlikely with how they started this season — and even a few games after the All-Star break.

Texas (80-69) just wrapped up a 7-3 homestand that included a four-game sweep of Houston last week to overtake the Astros for the division lead.

"Feels good, especially the team clicking at the right time," said shortstop Elvis Andrus, among only five players left from both of the Rangers' only World Series appearances in 2010 and 2011. "Everybody together, and just pushing in the same direction."

After an American League-high 95 losses in 2014, the Rangers lost ace pitcher Yu Darvish to Tommy John surgery in spring training, then were 8-16 and already 9 1-2 games out of first place a month into this season. They made up eight games of that deficit by mid-June, only to lose seven of eight home games going into the All-Star break.

The Rangers were again nine games back after losing two of three at Houston out of the break, then dropping a series opener July 20 at Colorado. But they are 37-20 since, with Toronto the only AL team with a better record in that span.

"This was a buildup getting to this point, and just how we've played getting here," Banister said. "They got punched in the mouth in April, didn't like it, tasted a little bit of their own blood. ... Since the All-Star break, they kept their head down, they stayed focused."

Prince Fielder and Shin-Soo Choo were the big offseason additions before 2014, when both were plagued by injuries — Fielder playing only 42 games before surgery on a herniated disk in his neck.

Adrian Beltre reached base 10 consecutive plate appearances and had 12 RBIs in the last homestand.

Texas opens a three-game series at Oakland on Tuesday night, before three games at Houston. The regular season ends at home against Detroit and the Los Angeles Angels.

"The energy's here, the way we play together, the way we are in the clubhouse with each other. There are a lot of similarities," Mike Napoli said. "Ever since I got here, it's been fun, upbeat, everyone picking each other up."

Napoli was reacquired from Boston in an Aug. 7 trade, and the Rangers even put him in left field for the first time in his pro career to get his bat in the lineup. The slugger hit .350 with 10 RBIs in the 2011 World Series for Texas, then was the All-Star starting catcher in 2012 before leaving for the Red Sox and being part of their World Series championship in 2013.

Ace left-hander Cole Hamels was coming off a no-hitter when he and lefty reliever Jake Diekman came from Philadelphia in a deal completed at the July 31 deadline, when the Rangers also got reliever Sam Dyson from Miami.

Hamels, scheduled to start Friday against the Astros, is 4-1 with a 3.73 ERA in nine games since the trade, and Texas has won his last seven starts.