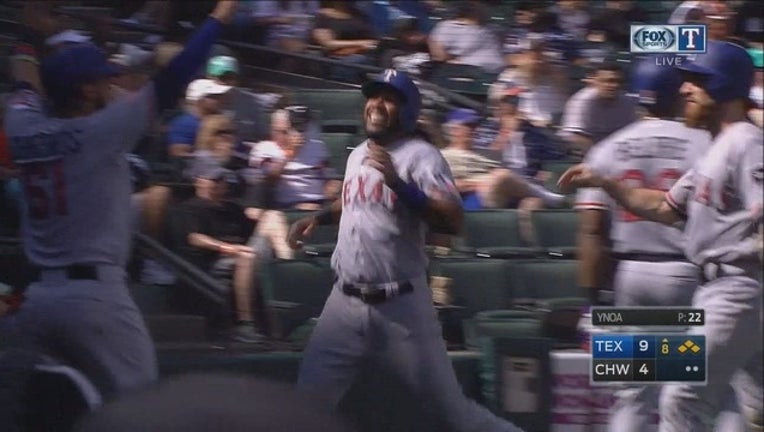 CHICAGO (AP) - Cole Hamels overcame a shaky start to win for the first time since April, and the Texas Rangers hit three home runs Saturday in a 10-4 victory over the Chicago White Sox.

Hamels (3-0) allowed two runs and two hits in 6 2/3 innings for his first win since April 26. He retired 19 straight batters after giving up a double and a homer and hitting a batter with a pitch in the first inning of his second start since returning from a strained right oblique.

White Sox starter Derek Holland (5-8) didn't fare as well in his first game against his former team. Holland, who spent his first eight seasons with the Rangers and was on their 2010 and 2011 AL championship squads, allowed five runs in 5 1/3 innings. He is 1-5 in his last seven starts.

Napoli smacked his 15th home run, a two-run shot, in the sixth.

Hamels struck out six and walked none. The left-hander was sharper than in his previous start, when he allowed seven runs in 4 1/3 innings against Cleveland after missing two months.

Left-hander Alex Claudio replaced Hamels and allowed a two-run double in the seventh before finishing up.

Odor hit his 14th home run and Nomar Mazara had a three-run triple in the Rangers' four-run eighth.

Chicago slugger Jose Abreu homered for the second straight home game after hitting his first 13 home runs on the road to set a club record.

The White Sox have lost six of nine.

The Rangers, who lead the AL with 16 blown saves, plan to try a closer-by-committee approach until further notice. Texas manager Jeff Banister announced the decision one day after his team squandered a two-run lead in the ninth inning of an 8-7 loss to the White Sox. Claudio and right-handers Matt Bush, Jose Leclerc and Keone Kela are in the mix to close games. Bush has assumed the role lately, but he gave up three runs in the ninth inning Friday for his fifth blown save. Kela is 4-1 with a 2.64 ERA but dealing with soreness in his right biceps. "We've been inconsistent, so we've got to find what our best recipe is for getting the 27th out," Banister said.

Rangers: LHP Martin Perez (broken right thumb) is expected to come off the disabled list and start Monday against Boston. . RHP Tony Barnette (sprained right finger) was scheduled to throw off a mound and could soon rejoin the bullpen.