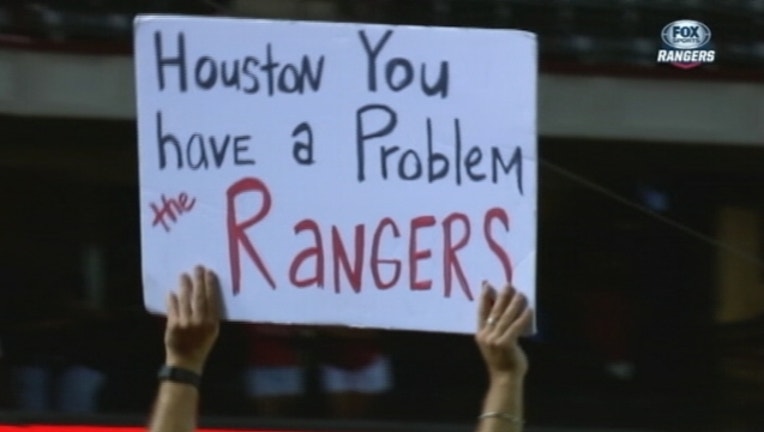 ARLINGTON, Texas (AP) -- Prince Fielder hit two of Texas' season-high five homers and drove in five runs as the Rangers extended their AL West lead with a 14-3 victory over the Houston Astros on Wednesday night.

Fielder's RBI single in the first put the Rangers ahead to stay. The slugger pulled both of his homers into the second deck in right field, leading off the third and then capping an 11-pitch at-bat in the sixth with a three-run shot that made it 12-1.

Mike Napoli, Rougned Odor and Bobby Wilson all homered for Texas (78-67), which won its third straight game in the series. The Rangers, who took over first place with a 6-5 win Tuesday night, lead Houston by 1 1-2 games going into the series finale Thursday.

Martin Perez (3-5) gave up one run over seven innings while allowing 10 base runners -- nine hits and a walk. The left-hander struck out three.

After winning in their final at-bat the previous two nights, the Rangers took a 6-0 lead in the first off Dallas Keuchel (17-8), the lefty who was the AL starter in the All-Star Game this summer.

Keuchel entered the game with an AL-best 2.22 ERA that was up to 2.56 after he allowed a career-high nine runs and 11 hits over 4 2-3 innings. He struck out five without a walk while giving up three home runs, matching a career high.

Delino Deshields and Shin-Soo Choo got things started in the first with consecutive singles before Fielder had a one-out single and then scored on Napoli's three-run homer. Odor added a two-run shot.

Fielder's two homers pushed his total to 21, making the ninth time in his career with at least 20 in a season. It was his 27th career game with multiple homers.

Napoli has 17 homers, four since Texas reacquired him from Boston on Aug. 7. Odor has 14 homers and Wilson homered for the first time since Aug. 31, 2012, while playing for the Los Angeles Angels.

Astros: C Jason Castro (right quad strain) missed his 17th game, but caught in the bullpen before the game. Manager A.J. Hinch said there is a chance Castro could play in the series finale Thursday. ... OF Carlos Gomez (left intercostal muscle) did some exercises but didn't swing a bat. ... 3B Marwin Gonzalez (swollen left index finger, sore wrist) returned to the lineup after missing two games, but was replaced in the field in the fourth inning.

Rangers: C Robinson Chirinos is expected to swing a bat Thursday for the first time since re-aggravating a left shoulder strain last week.

Astros: Houston wraps up its season-long 11-day, 10-game trip. The Astros are 2-7 so far. They have lost the last three games started by rookie RHP Lance McCullers (5-5).

Rangers: RHP Colby Lewis goes for his career-best 16th win. He is coming off a shutout vs. Oakland when he needed only 97 pitches.