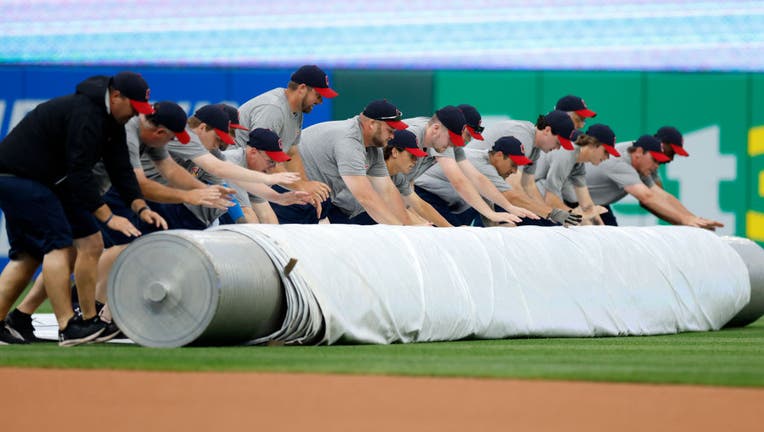 CLEVELAND - The Cleveland Guardians were postponed by rain at home for the seventh time this season on Monday as their series opener against the Texas Rangers was called 20 minutes before the first scheduled pitch.

The teams were rescheduled for a traditional doubleheader on Tuesday, with the first game starting at 3:10 p.m.

Jon Gray (1-2) will start the opener for the Rangers against Cleveland’s Cal Quantrill (2-3). Texas left-hander Taylor Hearn (3-4) is scheduled to start Game 2, but the Guardians have not yet announced their pitcher.

Due to the bad weather, the Guardians have played just 19 games at Progressive Field, the fewest home games among major league teams.

"I’m so tired of people telling me, ‘When you were gone, it (the weather) was wonderful,’" Guardians manager Terry Francona joked before the latest postponement.

Cleveland has already played three doubleheaders at home, and the club has five more scheduled — two on the road (July 4 at Detroit, July 23 at Chicago), and three at home (June 28 vs. Minnesota, July 12 vs. Chicago, Sept 17 vs. Minnesota).

Francona acknowledged the makeups will stress Cleveland's roster, but there isn't much he can do about it. However, it is a worry.

"I’m just being honest," he said. "I don’t know if I’ve ever been in a situation where we’re down one in the loss column, but you’re back five or six games. That’s significant."

Rangers: The team still was discussing whether utility man Brad Miller (right hip impingement) will go on a rehab assignment before being activated. Manager Chris Woodward expects Miller to be ready by Friday or "shortly after."

Guardians: RHP Aaron Civale (left glute tightness) threw a side session before Monday's postponement. He'll make a rehab start later this week for Triple-A Columbus and may need another outing before he's back in the rotation.