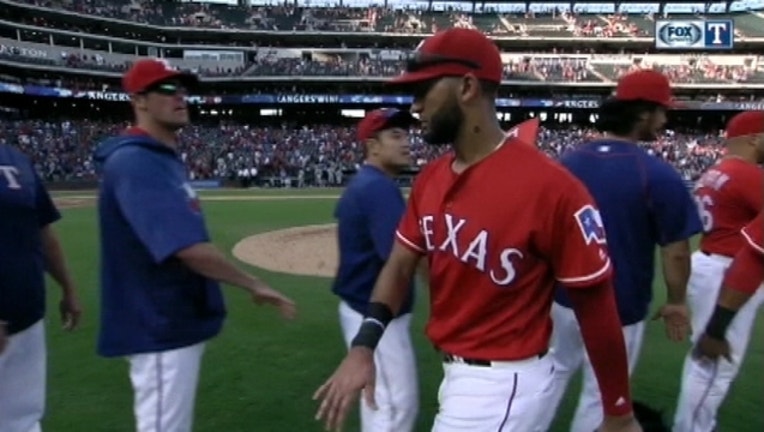 ARLINGTON, Texas (AP) — The Rangers' closest competitors in the AL West right now are the Houston Astros, and Texas hasn't let it be much of a competition.

Adrian Beltre and Nomar Mazara each homered, Derek Holland pitched his third straight quality start since coming off the disabled list and the Rangers beat the Astros 12-4 on Saturday for their seventh straight victory.

AL West-leading Texas is 13-2 against the second-place Astros this season and 37-19 against the division.

After trailing 1-0, the Rangers got their major league-high 42nd come-from-behind win. They've won eight of nine and scored at least 10 runs in each of their past three games.

"It's just the consistency of being able to fill (the lineup) out and the type of hitters we have," manager Jeff Banister said.

Evan Gattis had three hits for Houston, including a solo homer.

Ian Desmond stole home as part of a double steal in the seventh inning.

Beltre and Robinson Chirinos each had three hits. Chirinos was playing as a replacement for catcher Jonathan Lucroy, scratched because of flu-like symptoms.

"We had to replace a catcher today," Banister said, "and he was about as big as anybody in the lineup."

"That's a really good lineup with the power they have in the meat of their lineup," Musgrove said. "I've got to do a better job of getting the 7-8-9 hitters out."

Right-hander Brady Rodgers made his big league debut for Houston in the eighth and allowed five runs while getting two outs.

Houston led early after Teoscar Hernandez drove in a run with the last of three singles in the second inning.

Half an inning later, Beltre hit his 26th homer into the visitors' bullpen in left-center field, and then Texas went ahead 3-1 on Moreland's two-out, two-run double in the fourth.

Holland had two strikeouts, both by Jason Castro. The first ended the second inning with two runners on base.

"That is a team that's competing to get in the playoffs as well," Holland said. "It's not like it was an easy task. The main thing was not letting my emotions get the best of me. They got the run early on me. I had to make sure it was all it could be."

Houston's Jake Marisnick hit a two-run homer against Dario Alvarez in the ninth.

Gold medal-winning Olympic gymnast Madison Kocian threw out the first pitch before the game. The Dallas native performed a front walkover before picking up the ball and delivering a perfect strike.

Astros: 1B Marwin Gonzalez remained out. He hasn't played since experiencing discomfort in his right hamstring on Wednesday. "I'll use him if I need to," manager A.J. Hinch said, "but I'm going to try to stay away from him as long as possible until he feels better."

Astros: RHP Collin McHugh (9-10, 4.80) is scheduled to start the series finale on Sunday. He's 4-1 in his career against Texas. The loss came on June 9, when the Rangers knocked McHugh out in the fourth inning.