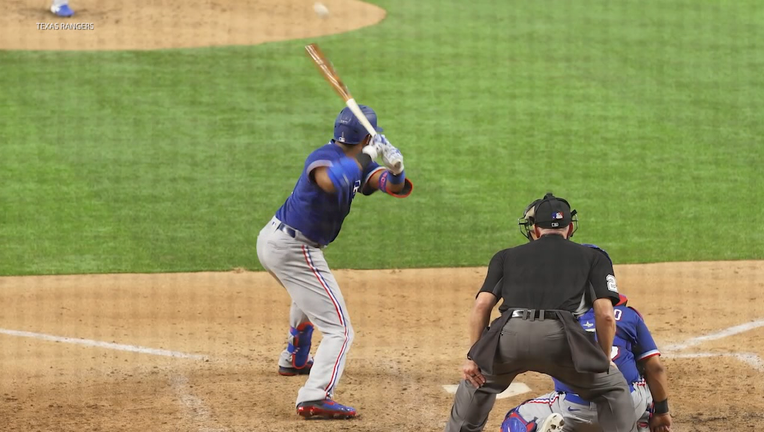 ARLINGTON, Texas - The Texas Rangers will play for the first time in their new ballpark for an exhibition game with no fans in the stands.

There is certainly nothing normal about the 2020 MLB season. But to focus on the upside, there will finally be a baseball game in the gleaming new $1.2 billion Globe Life Field.

The Rangers will take on the Colorado Rockies for exhibition games Tuesday and Wednesday night.

The COVID-19-shortened, 60-game regular season opens Friday night with the Rangers also taking on the Rockies.

Fans will not be allowed to attend any major league games for the first week. The situation will be re-evaluated in August.

Safety precautions are in place for players and staff, including face coverings in many situations and social distancing.

Rangers take on Rockies as baseball returns without fans

The Texas Rangers will play the Colorado Rockies Tuesday night for their first exhibition game in Globe Life Field.

Rangers catcher Robinson Chirinos said he’ll miss feeling the energy and excitement of the fans understands the need to adapt to the times.

“I’m happy and excited to be back on the field and do what I love,” Chirinos said. “It’s such a hard time we’re living right now.  I know the league’s trying time give something to the fans to look for, especially in this tough time.”

Chirinos also said he’s certain everyone will be talking about this season for years to come because of how different it’s going to be.

Again, the Rangers take on the Rockies for two exhibition games starting Tuesday night. Both games are on FOX Sports Southwest.

Then, the regular season start at Globe Life Field on Friday.

This Saturday, FOX will have lots of baseball coverage – the triple headers starts with the Brewers against the Cubs, then the Giants take on the Dodgers, followed by the Yankees playing the Washington Nationals. It all starts Saturday at 11:30 a.m.

Rangers announcer Chuck Morgan said crowd noises will be added to the telecasts so fans will hear people cheering at the appropriate times when watching the games on TV.