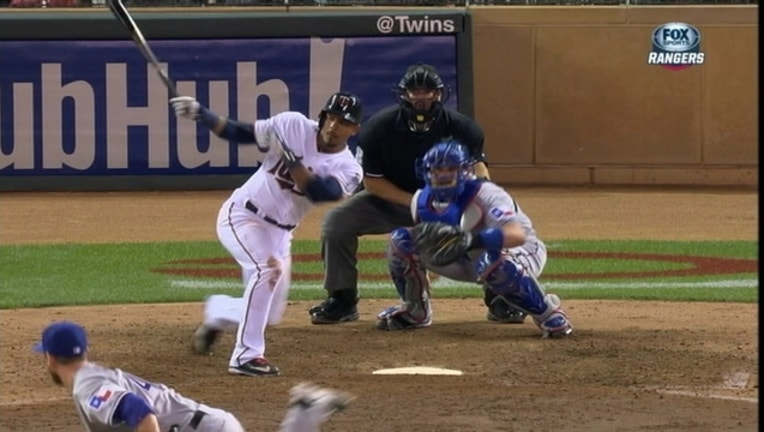 MINNEAPOLIS (AP) — The Texas Rangers had the formula in place Tuesday night that they hope will take them into the postseason: Early runs, strong starting pitching and the preferred bullpen options available.

Unfortunately for the Rangers, the Minnesota Twins messed up the equation.

Eduardo Escobar's two-out double in the ninth inning drove in the winning run, capping a late rally by Minnesota for a much-needed 3-2 victory.

"We had the guys in place we wanted," Rangers manager Jeff Banister said. "Again, it's not always perfect. Doesn't always work out the way you want it to work out."

Spencer Patton (1-1) quickly got the first two outs in the ninth. But he walked Kurt Suzuki before reaching the bottom of the order with Escobar, who grounded a full-count fastball down the right-field line. Suzuki scored easily and the Twins were able to smile and dance.

Joe Mauer and Miguel Sano tied the game with RBI doubles in the eighth off Jake Diekman, acquired last month by the Rangers in the same trade with Philadelphia that fetched ace Cole Hamels. Diekman ominously walked Escobar to start the eighth inning, setting the stage for Mauer and Sano to come through.

"My fastball was really flat," said Diekman, who before Tuesday had not allowed a run in six innings pitched with Texas. "You can't really fall behind hitters that much."

Glen Perkins (1-3) pitched a scoreless ninth to pick up the win, just the Twins' seventh in 23 games since the All-Star break.

Elvis Andrus hit a two-run homer in the second inning, and Yovani Gallardo and the first two Rangers relievers nearly made that stand up.

Gallardo gave up only two singles and three walks in 5 2-3 shutout innings, but he threw 100 pitches. Gallardo, though an important cog in a Rangers' rotation stung by season-long injuries to Yu Darvish and Derek Holland, has completed six innings only once in his last seven turns.

The Twins just returned from a brutal 1-6 trip, pushing them into sixth place in the chase for two American League wild cards and prompting a players-only meeting in the clubhouse before batting practice.

"You weather the starter out and get them out of there early and get to that bullpen," Twins outfielder Torii Hunter said.

The Rangers, meanwhile, have nudged closer in the wild-card race and even back into legitimate AL West contention, entering the evening just 4 1-2 games behind front-running Houston. But this was the type of loss they can ill afford at this point in the season.

"There's a lot of grit in that clubhouse out there and how they play," Banister said. "They bounce back very well."

The Rangers scratched Hamels from his scheduled start Thursday because of a sore left groin, and either Chi Chi Gonzalez or Anthony Ranaudo will be brought up from Triple-A to take his turn in the rotation.

COOLING OFF ON THE ROAD

The Rangers have a league-best 32 wins on the road, but they are 1-4 in their last five away from home, including Tuesday's loss to Minnesota.

Rangers: Darvish, five months removed from Tommy John surgery, will be examined this week by a team physician and could begin a light throwing program, GM Jon Daniels said. ... Holland, who has been hit hard over three starts on a rehab assignment for the shoulder injury he sustained in his first inning of the season, will need at least another turn or two, Daniels said.