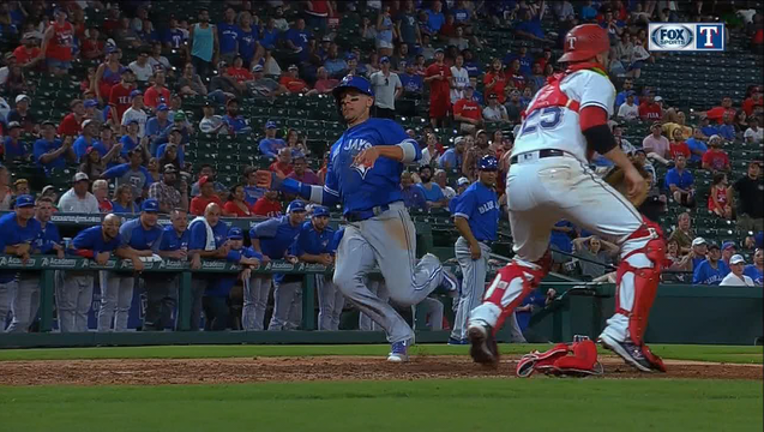 ARLINGTON, Texas (AP) - Wins in the past two playoff matchups, a couple of victories in Toronto during a three-game set earlier this season and now a ninth-inning rally in Texas.

The Blue Jays are finding ways to beat the Rangers, even if Jose Bautista was roughed up a bit by Rougned Odor in that wild brawl a little more than a year ago.

Kendrys Morales hit a go-ahead single after a tying single by Josh Donaldson in the ninth, and Toronto beat rival Texas 7-6 on Monday night.

The Blue Jays won despite blowing a 5-1 lead in their first visit to Texas since last postseason, when they won the first two games in a best-of-five sweep that was their second straight Division Series victory over the two-time defending AL West champs.

"I guess there's a little bad blood between us, but I think it's all in the past now," Toronto starter Marco Estrada said. "I don't think anybody even thinks about it, to be honest."

Donaldson's single off closer Matt Bush scored Ryan Goins, who just beat the throw to second for a leadoff double. Morales' hit to the gap in left-center scored Donaldson from second after a stolen base and a walk. It was the third blown save in 11 chances for Bush (2-2).

The Rangers have already replaced one closer in Sam Dyson, who was eventually traded to San Francisco.

"Anytime you lose a game like that, they're challenging," manager Jeff Banister said. "However, again, I'll repeat, rewind and repeat about what I say about this team, where they're able to bounce back and move on."

Jeff Beliveau (1-0) pitched a perfect eighth, and Roberto Osuna worked a 1-2-3 ninth for his 18th save in 22 chances. The Blue Jays got 5 1/3 scoreless innings from five relievers.

"I'm proud of all of them," manager John Gibbons said. "It was a tough game on both sides. Both starters gave up runs early and then both bullpens shut the teams down until the end."

Toronto's Steve Pearce and Adrian Beltre of the Rangers traded three-run doubles in the fourth, with Beltre's liner to right-center capping a five-run inning for a 6-5 lead that held up until the ninth.

Bautista, whose fight with Odor at second base in the final regular-season game in Texas last season had its roots in his epic bat flip in a dramatic Game 5 win in 2015, started the Blue Jays' four-run fourth with his 12th home run, a 442-foot shot over the lower-deck seats in left.

Elvis Andrus had a two-run single before Beltre's hit as three pitchers for both teams combined for 79 pitches in the fourth.

Justin Smoak had three hits, including a career high-tying 20th homer to get the Blue Jays even in the second after Nomar Mazara's ninth homer for Texas in the first, a 435-foot drive to the second deck in right.

Estrada struggled for a fourth straight start, allowing seven hits, four walks and six runs in 3 2/3 innings to push the right-hander's totals to 35 hits and 23 runs in 16 1/3 innings during that span. Austin Bibens-Dirkx gave up two homers and five runs over five innings in the third career start for the 32-year-old rookie right-hander. He struck out five.

With his double, the 38-year-old third baseman in his 20th major league season pulled even with Harmon Killebrew on the career RBI list with 1,583. Beltre also passed Al Kaline at 1,582. Beltre drew even with Cal Ripken at 23rd on the career list for extra-base hits with 1,078. He's at 2,959 career hits.

Blue Jays: RHP Joe Smith was placed on the 10-day disabled list with a sore right shoulder, and RHP Leonel Campos was brought up from Triple-A Buffalo to replace him.

Rangers: LHP Cole Hamels (right oblique strain) is scheduled for his second rehab start Wednesday with Double-A Frisco. He could rejoin the rotation next week in Cleveland. He's been out since May 4. ... RHP A.J. Griffin (left intercostal strain) was moved to the 60-day DL to make room on the 40-man roster for Tanner Scheppers, who was called up from Triple-A Round Rock. OF Jared Hoying was sent down.

Blue Jays: LHP Francisco Liriano (3-2, 5.36 ERA) makes his fourth start since returning from a left shoulder injury. He's coming off his longest outing of the season, seven innings against Tampa Bay. He gave up three runs - two earned - with nine strikeouts in a no-decision.

Rangers: RHP Nick Martinez (1-3, 4.67) gets his second start since pitching four scoreless innings in his only relief appearance of the season. His first eight outings were starts.