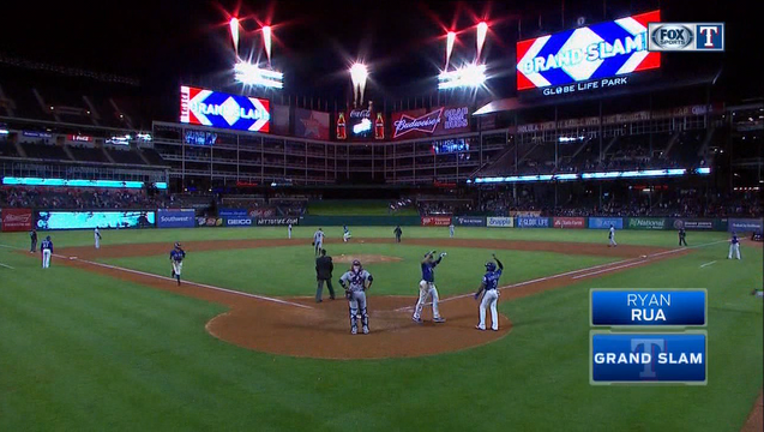 ARLINGTON, Texas (AP) - Delino DeShields provided a spark at the top of the lineup. Ryan Rua and Shin-Soo Choo topped off a big finish with some late long balls.

Rua hit his first career grand slam and Choo connected for a three-run homer in Texas' eight-run eighth, leading the Rangers to a 14-3 rout against the Minnesota Twins on Wednesday night.

Before the game got out of hand, the Rangers went ahead to stay when Joey Gallo took a couple of hits on a tiebreaking trip around the bases.

"That was a pretty weird sequence, but I'll take it," Gallo said. "And take the lead, that's nice."

Gallo was hit by a pitch leading off the sixth against Taylor Rogers (1-1). The young Texas slugger scored on a wild pitch by another reliever to make it 3-2, and was struck on the back of the right shoulder by catcher Chris Gimenez's throw after the ball ricocheted hard off the brick backstop.

Elvis Andrus added a two-run single and eventually scored on a passed ball in Texas' four-run sixth, which included only two hits.

"We've been searching for runs," manager Jeff Banister said. "Prior to later innings, we'd only had two hits with runners in scoring position. But with that, guys continued to grind through. ... I think they were really rewarded late with the approaches that they've had."

DeShields, in the leadoff spot for only the second time this season, was 2 for 3 with three walks, three runs scored, two stolen bases and an RBI.

Texas, after falling behind 2-0 on Eduardo Escobar's homer in the second off Cole Hamels, set season highs with 14 runs and 14 hits. Rougned Odor's two-run single in the fifth tied the game.

"We kind of danced around there early," Twins manager Paul Molitor said. "Odor got them going with the big two-out single, and we just couldn't push the right buttons after that."

Twins starter Hector Santiago, a day after his grandmother died and before going on MLB's bereavement list, threw a season-high 104 pitches over five innings. The lefty allowed two runs and six hits, struck out six and walked four.

"I talked to him after the game, praised him for the effort he gave us," Molitor said. "You know it's got to be on your mind."

Santiago said he spent a lot of time over the last couple of days talking with family to set up his grandmother's funeral, which will be Sunday.

"Trying to get everybody over the hump, and trying to have a better day," he said. "But it wasn't too bad. Today, I wasn't as efficient as I wanted to be. I threw some good pitches that guys laid off of."

Choo, hitting ninth for the first time in his career, became the first Rangers player since at least 1984 with a triple and homer in the same inning. His seven total bases were the most in an inning since Adrian Beltre homered twice in an inning against Baltimore on Aug. 22, 2012.

Twins third baseman Miguel Sano had his second consecutive three-hit game. Sano played in the series while appealing his one-game suspension announced by MLB on Monday for what were deemed "aggressive actions" that caused the benches to clear during a game Saturday against Detroit. Sano was 0 for 4 in the opener at Texas.

Texas avoided its third sweep already this year. The Rangers were swept only three times all of last season when repeating as AL West champs.

Twins: Reliever Trevor May, who had Tommy John surgery in late March, visited this week while in Texas with Rangers team physician Dr. Keith Meister, who did his surgery. May said he is encouraged with the early progress, knowing he won't be pitching again until next year.

Rangers: Reliever Sam Dyson (bruised right hand) likely will be activated from the 10-day DL when eligible Friday. He made back-to-back appearances at Triple-A Round Rock on Monday and Tuesday. ... RHP A.J. Griffin (gout in left ankle) will go on a rehab assignment with Round Rock instead of coming off the DL on Friday.

Rangers: Nick Martinez makes his second consecutive start in place of Griffin on Friday night in opener of home series against the Los Angeles Angels.