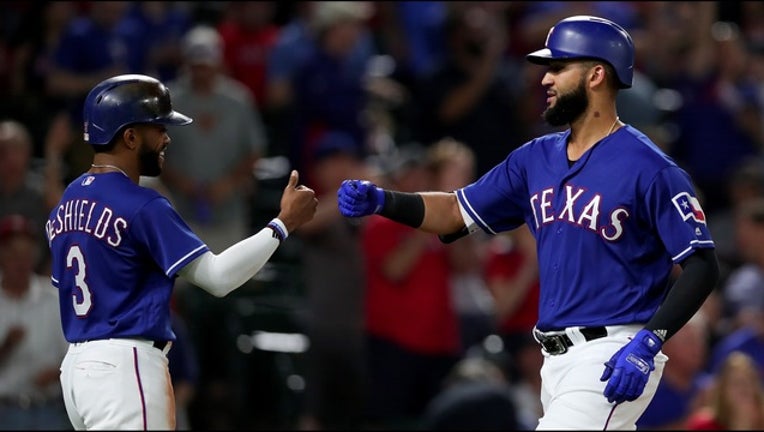 Nomar Mazara of the Rangers celebrates with Delino DeShields after hitting a three run home run against the Red Sox in the bottom of the fourth inning at Globe Life Park in Arlington on May 3, 2018. (Photo by Tom Pennington/Getty Images)

Mazara gets $3.3 million, a big raise over the $563,560 he made last season. DeShields received a $1.4 million deal after earning $561,500 last year. They were the only two Texas players eligible for salary arbitration this winter.

Mazara made his major league debut in 2016 at age 21 and has hit 20 home runs in each of his three seasons. The right fielder batted .258 with 77 RBIs in 128 games last year, when he missed a month because of a sprained right thumb. The thumb still bothered him after he returned in mid-August and he failed to homer in his last 22 games. But he didn't need surgery after a postseason exam.

The speedy DeShields, the team's opening-day center fielder two of the last three seasons, hit .216 with 20 stolen bases in 106 games last year, when he fractured the tip of his right middle finger in mid-August after getting hit by a pitch on an attempted bunt. He missed 20 games after a hamate bone fracture in his left hand the first week of the season.

As a rookie in 2015, DeShields was the club's primary center fielder and leadoff hitter when the Rangers won an AL West title. He was the starting center fielder for the 2016 and 2018 openers.