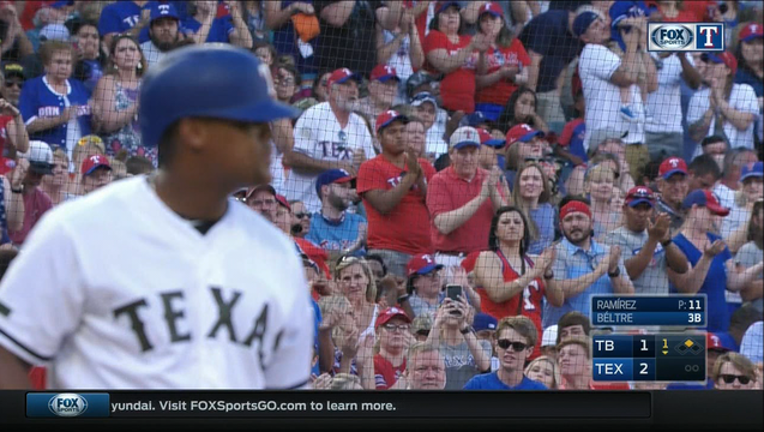 ARLINGTON, Texas (AP) - Adrian Beltre was finally in the lineup for the Texas Rangers on Monday night, making the debut in his 20th major league season and resuming his pursuit of 3,000 hits.

Beltre was activated from the disabled list before the series opener against Tampa Bay. He was batting fourth and playing third base after missing the season so far because of a right calf strain. He also had issues with his left calf during spring training.

The 38-year-old Beltre went into this season 52 hits shy of 3,000 for his career. He won his fifth career Gold Glove last season.

The Rangers waited until after Beltre went through infield drills and batting practice before posting their lineup about 90 minutes before the game, even though manager Jeff Banister already had said all indicators were that Beltre would be OK.

Joey Gallo hit a team-leading 15 homers as the primary third baseman in Beltre's absence. Gallo was batting seventh against the Rays and playing first base for Mike Napoli, who had some tightness in his back.

Gallo, who took grounders and fly balls before Monday's game, will also play some in left field and still get time at third base when Beltre is the designated hitter or gets a day off. Gallo played 19 games in the outfield during his big league debut in 2015.

Infielder/outfielder Drew Robinson was optioned to Triple-A Round Rock to make room on the 25-man roster for Beltre's return.

Beltre went 7-for-17 in three games during extended spring training in Arizona before rejoining the Rangers for the start of their eight-game homestand.

The Rangers have three days off in an eight-day span after the three-game series against the Rays, providing some built-in time off for Beltre, who likely will play third base and DH early in his return.

"This seems to be as good a time in the schedule if you look at it for a guy that's a defender and been out for a while, to kind of get back on his legs and moving, and the nine-inning grind," Banister said. "The optimum mindset is find a way best to keep him on the field for the long haul and not just the short term."

Beltre's last game with Texas was in spring training against the Los Angeles Dodgers on March 26. He was 0-for-12 with two walks in Cactus League play during the spring, and 1-for-15 with a walk and an RBI in four games with the Dominican Republic in the World Baseball Classic in March.